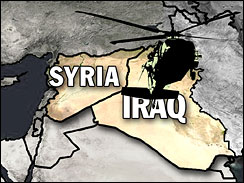 Why now indeed?
After all these years, the US pulls a punch out of its bag of latent tricks and popped a farmhouse inside Syria on Sunday, supposedly chasing after some bad al-Qaeda types from inside Iraq.

And this was a boots-on-the-ground operation.
From antiwar.com:

Decider George will continue to shit out bile until the day he’s run out of the White House.
Juan Cole, an expert on this kind of war-political bullshit, says it all at Informed Comment:

When Decider George is finally gone!