In a metaphor mix, Afghanistan’s capital appears encircled in a hangman’s noose as Taliban forces expands its footprint across the country.
In a report issued Monday by a France-based think tank:

And the end of foreign presence — not the end sought by the US — but an end nevertheless, could be fast approaching, and there might not be anything to be done about it. 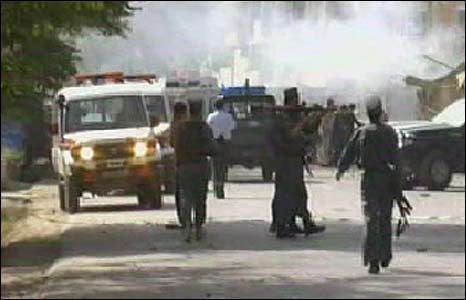 The group’s statement also says the Taliban is “closing a noose around Kabul,” developing a strategy “where three out of the four main highways into Kabul are now compromised by Taliban activity.”

NATO and the tortured, tormented Aghan government, which reportedly controls only Kabul, beg to differ — figures used in the International Council on Security and Development (ICOS) report are not credible.
From Reuters:

That last comment has a bad, bad not-so-good ominous ring to it.

In fact, the knowledgeable Juan Cole notes this morning:

The NATO response to the ICSD report is another Dufus Dick Cheney lie on Iraq: “I think they’re in the last throes, if you will, of the insurgency.”
Two years later Dufus Dick admitted he was wrong in the “throes” comment, but continued still the lie: “I firmly believe,” Cheney said, “that the decisions we’ve made with respect to Iraq and Afghanistan have been absolutely the sound ones in terms of the overall strategy.”

Wrong!
Inbound US troops are to be deployed south of Kabul to halt the Taliban instead of elsewhere:

And just for the record:

The noose is coming.