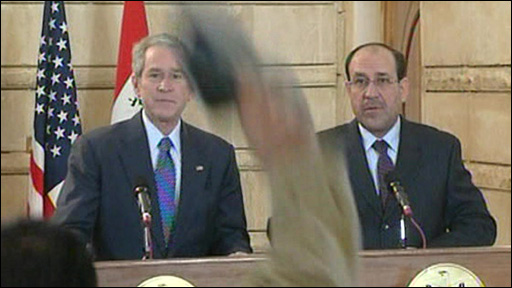 During the daily US State Department press briefing Thursday, Sean McCormack said the infamous shoe-throwing incident last weekend will be eclipsed by other more-important shit 50 years from now.

An image, though, for pure foolish failure: A shoe-gram for the last eight years.
(Illustration found here).

Although Muntadar al-Zaidi’s attempt to knock Decider George out of the box is really, really funny, the actual reality of the man and the entire Iraq affair is way-more than deadly serious.
And we’re not talking about 50 years from now, but in the right here and now.
In a Pew Research survey published Thursday nailed Decider George with shoe-leathered distaste:

If one looks hard at the stills/video of the shoe incident, Decider George and Iraq Prime Minister Nuri al-Maliki appear like a couple of Marx Brothers, or a couple of dudes involved in a Laurel and Hardy routine, while at the same time, the whole episode seems a dream, not really happening, and Decider George isn’t ducking, and then ducking again — that flat, dumb-ass expression on his face — and we wait for the little, ‘That’s All Folks,’ to end an eight-year horror-tune.
If the one shit fits, try the other for size.