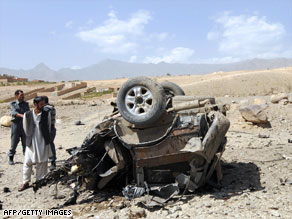 A now-no-longer-forgotten war, the ponderous grind-down conflict in Afghanistan is getting some payback time in the press.
Although economic news played up front in the US — President Obama announced Wednesday his homeowners bailout plan, a day after he signed his $787 billion “overall” economic stimulus package — events in Afghanistan are helping nudge that disaster back toward center stage.
(Illustration found here).

Looking at Afghanistan in its current mode, coupled with its historical back-story as the graveyard of empires, the US military operation now nearly seven-and-half-years along carries early-building aspects of another foreign-populated necropolis.
And working without an “end game,” or any overall strategy will quickly increase burial plots.
In fact, a Taliban honcho told CBS he doesn’t understand “why the U.S. relies on figures and the number of troops in a country such as Afghanistan, where the number of foreign invaders has never made any difference, and the winners have always been the freedom fighters.”
This Taliban guy, supposedly a former government minister from the regime that ruled Afghanistan when the US invaded in October 2001, also said the number of “freedom fighters” has doubled since last year to more than 10,000 and the insurgency has changed tactics, moving from rural areas to urban.
He also snarked a deep, scary dig:

Afghanistan looks, walks and talks like another “q” word — (quagmire).

An Iraqi US troop “surge” may not re-cycle in Afghanistan, a land-locked country of 251,825 square miles with 80 percent of its population located in rural areas, tied together in at least nine major demographic sects, blended into tribes and clans scattered about a huge, magnificent landscape.

Such a military environment requires an â€œthe indirect approach,â€ which is working â€œby, with and throughâ€ host-nation forces — rather than ‘surges’ of U.S. troops.
(Illustration found here).

Although Obama approved 17,000 more troops this week, emphasizing “the deteriorating situation in Afghanistan, which has not received the strategic attention, direction and resources it urgently requires,” the NATO Commander, US Gen. David McKiernan painted a “tough year” ahead despite the added GIs.
Mckiernan wants as many boots on the ground in country, but even then, as he says, since the southern areas where the Taliban is the strongest has “stalemated” and unlike Iraq, this is no hit-hard-and-get-out-quick operation:

The Soviets had at least 100,000 troops in country for 10 years! (Rotating more than 600,000 through the country).
Talk about unhealthy — The Soviet Armed Forces lost 14,453 personnel, 417 servicemen were missing in action or taken prisoner; the debacle eventually led to the demise of Soviet Russia.
Other than that…

Main problem, the “outsider” complex: US troops face the distrust and anger from the population and the slaughter of civilians has just about lost the average Afghan’s heart and mind.
Last month, Newsweek screamed Obama’s Vietnam, comparing the Southeast Asia mess with the current South Asia mess, concluding there’s “no easy way out.”
And just this week, Sen. Russ Feingold (D-WI) said in a statement released on Tuesday — which received little if no media attention — that maybe more GIs in Afghanistan is not the right plan of action.
According to Raw Story:

Obama and the US might be like that coyote who’s ran way, way out over a cliff, and once he realized his fatal error, starts grabbing at nothing but air as he falls way, way down into a far, deep canyon to spatter in a tiny, tiny dot.