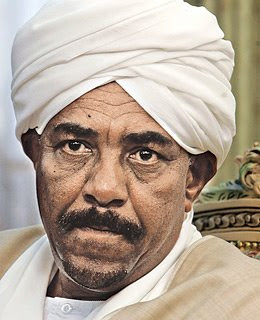 After nearly a year, an arrest warrant was issued Wednesday for Sudan’s Omar al-Bashir, charging the guy with war crimes and crimes against humanity.
The good Mr. President, however, told the International Criminal Court to literally stuff it, and then performed a kind of nasty-wacko dictator routine:

Despite the ICC nailing al-Bashir for “intentionally directing attacks against an important part of the civilian population of Darfur, Sudan, murdering, exterminating, raping, torturing and forcibly transferring large numbers of civilians and pillaging their property,” the Hague-based UN court stopped short of popping the cruel ass-bastard with that real-awful charge: genocide.
Last July, ICC’s prosecutor asked for warrants accusing him of “genocide, crimes against humanity and war crimes in Darfur.”
The ICC has since then dropped the term ‘genocide’ from its list of charges.

War criminal is an interesting pair of words, slightly paradoxical.
As if the word and meaning of war wasn’t enough to be criminal, someone during a war then does shit even worse than war itself — Hitler the obvious, to Henry Kissinger, the slightly-less obvious, with a shitload of assholes in between — and is deemed a lawbreaker.
The US has a history that’s not real pretty — ethnic cleansing and genocide was used as a weapon against indigenous peoples — and along with such things as the Kissinger case above, makes this country a bit gun shy of international courts of law.
Especially among warmonger types.
During the reign of George Jr. Bush, the ICC was actively attacked, and official US policy “vehemently opposed the setting up of the ICC, fearing its soldiers and diplomats could be brought before the court which will hear cases of war crimes and crimes against humanity.”
The US position:

One wonders: Last October, George Jr. “softened up” the hard-ass stance toward the ICC to supposedly bypass an African-induced attempt to halt/slow-down the prosecution of al-Bashir — the real reason is most likely the move was an early component of the reality-altering “Bush Legacy Tour:” The Bush administration’s care and anger at the horror of Darfur.
A bit hypocritical, it could easily be said.

Despite the blubbering and choking as George Jr.’s presidency went down the drain, a USA TODAY/Gallup Poll last month found 62 percent of Americans favored a criminal investigation, or at least some examination into the last eight years of the infamous, illegal and unproductive Global War on Terror.

However, even with all the public knowledge of George Jr.’s role in corrupting the Constitution and starting an illegal and useless war, even plundering the nation’s treasure to do so, a big obstacle to getting the facts might be political indifference.

Sen. Patrick Leahy, the Democratic chairman of the Senate Judiciary Committee, officially popped the idea Wednesday for a “commission of inquiry,” or for a “truth commission,” worked out on the lines of the 9/11 Commission and the Iraq Study Group.

An appearance of a definite lean toward correcting the horror of the last eight years.
And as US News&World Report noted yesterday:

And, once again, when these issues go international — such torture, rendition, and all those other sordid details pulled off under the cover-code of US “national security” — there’s a extremely-good chance George Jr. and his band of brigands could be hauled into court somewhere.
Democracy Now! and attorney David Rivkin:

Which brought the next guest Thursday morning on the same Democracy Now! program, Michael Ratner, to view the Leahy “truth” committee as a kind of whitewash, to create the illusion of fact-finding:

Forward to where?
A good, informative take on the likelihood of a war-crimes trial for George Jr. or anyone of a large-number of his cronies can be found here, and although hopefully somewhere down the time-line at least they will be revealed for what they were/are — dumb-ass, jackbooted criminal-politicians — if the past is kept secret, it then can figure out a way to the now.

Don’t underestimate the truth of the willing.
In fact, George Jr. could be next for the ICC:

Maybe George Jr. will tell ’em to eat it, too.