“If two cars come up next to you, one with a stranger and one with Dick Cheney, you get in the car with the stranger.”
— Wanda Sykes, advice to her children regarding really scary, dangerous people. 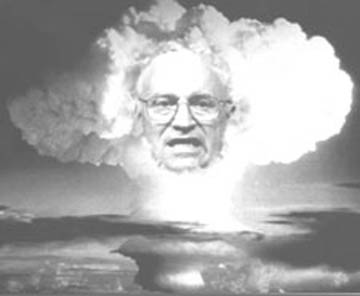 NearlyÂ 35 years ago a swarmy, ovulating Dick Cheney became the youngest chief of staff in White House history after his then-boss, Don Rumsfeld, orchestrated the ‘Halloween Massacre‘ in November 1975, which most likely doomed Gerald Ford’s run for the presidency the following year.
Ford later said: â€œIt was the biggest political mistake of my life. And it was one of the few cowardly things I did in my life.â€

The ironic understatement for the ages.

Ford, of course, was probably waxing pity about shoving his-then vice president Nelson Rockefeller off the ticket and snagging Bob Dole as VP for the 1976 presidential campaign against Jimmy Carter — a fatal move.
A nothing, historical footnote compared to giving Rumsfeld and Cheney daydreams of power which would come back and haunt the nation decades later.

Nearly six months prior to the above-mentioned ‘Halloween Massacre,” young Mr. Cheney revealed his inner, tortured self.
The New York Times had published a story by Seymour M. Hersh about an espionage program and Rumsfeld, then Ford’s chief of staff, was demanding action from his trusted aide, big Dick — The ball started to roll.
From the New York Times, in February 2007:

Out came the yellow legal pad, and in his distinctively neat, deliberate hand, Mr. Cheney laid out the â€œproblem,â€ â€œgoalsâ€ while addressing it, and â€œoptions.â€ These last included â€œStart FBI investigation â€” with or w/o public announcement.
As targets include NYT, Sy Hersh, potential govâ€™t sources.â€
…
Fast forward three decades and that same handwriting appears on a copy of the Op-Ed article in The Times that set in motion events that led to the perjury trial of I. Lewis Libby, Vice President Cheneyâ€™s former chief of staff.
…
â€œHeâ€™s had the same idea for the past 30 years,â€ said Kathryn S. Olmsted, a history professor at the University of California at Davis, who wrote about the Cheney file in her 1996 book, â€œChallenging the Secret Government.â€
â€œHis philosophy is that the president and the vice president and the people around the president decide whatâ€™s secret and whatâ€™s not,â€ she said. â€œThey thought they had to aggressively go after the press and Congress to reclaim the powers the president lost in Watergate.â€

And now, here in the modern era, the Dick is on the road trying to drum up confusion on the really neat idea of torturing anyone who needs to be tortured.
Charles Blow in aÂ NYT op-ed piece this morning nailed it.
Cheney’s got a bomb strapped to his innards:

My theory: Cheney isnâ€™t simply going out in a blaze of vainglory.
He felt the stiff winds of change and accountability blow across his coffin.
It roused and enraged him.
Now, heâ€™s on a political suicide mission.
And if his own party is collateral damage, so be it.
He would rather break it than see it bend anyway.

The Dick might be dying, but he’s still a snarled, dangerous animal — Do as Wanda says, get in the other car, fast!