Crowd: Right! Yeah! Yeah!
Bedevere: Bring her forward.
Witch: I’m not a witch. I’m not a witch.
Bedevere: Uh, but you are dressed as one.
Witch: They dressed me up like this.
Crowd: Augh, we didn’t! We didn’t…
Witch: And this isn’t my nose. It’s a false one.
Bedevere: Well?
Villager #1: Well, we did do the nose. 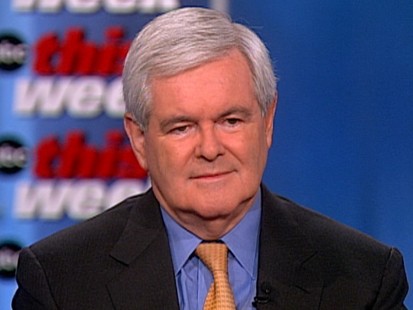 Â When President Obama nominated last week the first Hispanic to the US Supreme Court, Sonia Sotomayor, the gush of vile, twisted oratory which flushed forth from what’s left of the Grand Old Party would make a maggot blow chunks.

Despite the obvious, this political bullshit taints even Time magazine’s current cover as examined by the photo site BagnewsNotesÂ — and all this biased, racist outbursts have been considered genuine news.

Leading this obnoxious charge is one Newton Leroy McPherson, otherwise known as Newt Gingrich, former speaker of the US House of Representatives and all-around big mouth lout.Â
Why this guy is still even allowed a forumÂ is beyond me, the man’s hypocrisy knows no bounds.

Newt Gingrich does not seem to be deterred by the new message of the Republican leadership, such as Sen. John Cornyn (R-TX), that he and Rush Limbaugh should stop calling Sonia Sotomayor a racist.
Gingrich has now sent out a fundraising e-mail, asking for help to send blast faxes to every member of the Senate demanding that the Sotomayor nomination be defeated.
He even says that she shouldn’t even get a vote in the Senate, but should just have to withdraw
Gingrich warns that all of American civilization is at stake here.
“If Civil War, suffrage, and Civil Rights are to mean anything, we cannot accept that conclusion,” he writes. “It is simply un-American. There is no room on the bench of the United States Supreme Court for this worldview.”

Newt should ride/dash off into the sunset.
Right now he’sÂ 10 pounds of shit in a five-pound bag:

But it seems safe to say that New Gingrich has nothing left to add to the discussion.
The truth is that Gingrich may have been finished a long time ago.
Forced to resign the speakership of the House in the late 1990s after steering both his party and his personal life on disastrous courses, he has struggled to renew his franchise as the Grand Old Party’s big thinker.
…
But Gingrich tweeted off the deep end Wednesday when he jumped over the cliff of responsible Republicanism and into the chasm of right-wing talk-radio delusion.
Responding via Twitter to the nomination of Federal Appeals Court Judge Sonia Sotomayor to fill the vacancy that will be created by the retirement of Justice David Souter, Gingrich did not think.
He took his talking points from Limbaugh, who has been trying to foster the fantasy that the nominee is some kind of “reverse racist.”
…
Instead of calling for Judge Sotomayor to withdraw her nomination, the former speaker might want to consider whether it time for him to withdraw from the public debate he disminishes and dishonors by repeating the crude fantasies of a talk-radio ranter.

The ugly discourse on the Sotomayor nomination shows just where the GOP stands: No!