The earth is indeed melting away.

Clouds, those wispy, sometimes dark and ominoness floating forms we all take for granted as part of our natural environment whenever we look up — when clouds move into together and won’t let the sun shine in, everyone gets a little bit sad.
Now start crying as it seems a cloud can kill — eventually.
From the University of Miamiâ€™s Rosenstiel School of Marine and Atmospheric Science comes research into cloud cover and its impact on global warming:

Using observational data collected over the last 50 years and complex climate models, the team has established that low-level stratiform clouds appear to dissipate as the ocean warms, indicating that changes in these clouds may enhance the warming of the planet.
Because of inconsistencies in historical observations, trends in cloudiness have been difficult to identify.
The team broke through this cloud conundrum by removing errors from cloud records and using multiple data sources for the northeast Pacific Ocean, one of the most well-studied areas of low-level stratiform clouds in the world.
The result of their analysis was a surprising degree of agreement between two multi-decade datasets that were not only independent of each other, but that employed fundamentally different measurement methods. One set consisted of collected visual observations from ships over the last 50 years, and the other was based on data collected from weather satellites.
â€œThe agreement we found between the surface-based observations and the satellite data was almost shocking,â€ said Clement, a professor of meteorology and physical oceanography at the University of Miami, and winner of the American Geophysical Union’s 2007 Macelwane Award for her groundbreaking work on climate change.
â€œThese are subtle changes that take place over decades. It is extremely encouraging that a satellite passing miles above the earth would document the same thing as sailors looking up at a cloudy sky from the deck of a ship.â€

And what about some top secret US military pictures from high above the earth which enhance the shocking effect (and truth) of a dying planet?

The last guys in charge of the US hated the words, “global warming,” and so did everything in their power to censor any science about the subject.
Declassified US military spy-satellite photos taken over the past decade reveal water and very little ice over the Artic — bad global-warming evidence, suppressed by George Jr and his boys, just released by President Obama’s administration.

From the UK’s The Guardian:

One particularly striking set of images – selected from the 1,000 photographs released – includes views of the Alaskan port of Barrow.
One, taken in July 2006, shows sea ice still nestling close to the shore.
A second image shows that by the following July the coastal waters were entirely ice-free.
The photographs demonstrate starkly how global warming is changing the Arctic. More than a million square kilometres of sea ice — a record loss — were missing in the summer of 2007 compared with the previous year.
Nor has this loss shown any sign of recovery. Ice cover for 2008 was almost as bad as for 2007, and this year levels look equally sparse.
…
Disappearing summer sea ice poses considerable dangers, scientists have warned.
Ice shelves are used by animals such as polar bears as platforms for hunting seals and other sea creatures. Without them, they could starve.
In addition, ice reflects solar radiation.
Without that process, the Arctic sea could warm up even more.
The phenomenon threatens to set off runaway heating of the planet, say climatologists.

And what about funds for keeping track of this runaway climate thing?

The latest revelations have triggered warnings from scientists that they no longer have the funds to keep a comprehensive track of climate change.
Last week the head of the US’s National Oceanic and Atmospheric Administration (NOAA), Professor Jane Lubchenco, warned that the gathering of satellite data — crucial to predicting future climate changes — was now at “great risk” because America’s ageing satellite fleet was not being replaced.

This ‘thing’ with climate change/global warming is most-likely its appearance as a snail’s pace of a problem and won’t effect anyone in a long, long time — humans react to more immediate dangers first.
The big problem is that the problem is already here — what was once confined to the tropics is now in middle America.
Â 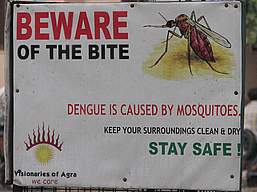 Mosquitoes that can transmit dengue fever, a disease thatâ€™s sometimes fatal and is more common in the tropics, are now found in 28 U.S. states and may extend their reach further as temperatures warm, a study said.

The reasearch study from the New York-based Natural Resources Defense Council, a nonprofit environmental group, also reported dengue infections have multiplied by thirty in the last 50 years, with as many as 100 million annual cases and 22,000 deaths worldwide.
Mosquitoes are tough-skinned little sumbitches — they can more easily survive and spread when winters are milder, so global warming may increase transmission.