A life-long favorite is no more: Soupy Sales dead at 83. 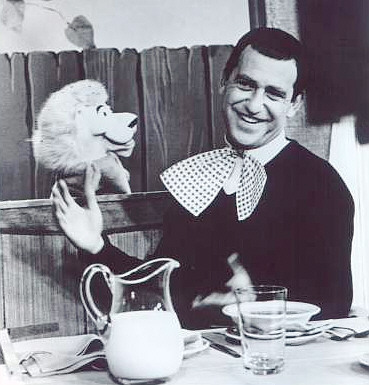 Even with all his funny shenanigans, Soupy Sales appeared as a really nice guy.
His show was one of my favorites as a kid and I loved all the characters he created, including the never-seen ‘naked girl,’ and he seemed to have great fun doing all those crazy things.
See a video of one of his sketches here.

Despite all the clowning around, Soupy worked hard to get the right knack and the right posture as he received his grandstand ploy — a pie in the kisser.
Laugh and laugh again, but now sad.

From the LA Times:

As the star of “The Soupy Sales Show,” he performed live on television for 13 years in Detroit, Los Angeles and New York before the program went into syndication in the United States and abroad.
Ostensibly for children, the show had broad appeal among adults who found Sales’ puns, gags and pratfalls deliciously corny and camp.
His cast consisted of goofy puppets with names like White Fang, Black Tooth and Pookie, and a host of off-camera characters, including the infamous naked girl.
The high point of every show came when a sidekick launched a pie into Sales’ face.
Sales once estimated that he was hit by more than 25,000 pies in his lifetime.
The gag became more than hilarious; it evolved into a hip badge of honor.
Frank Sinatra was first in a long line of celebrities who clamored for the privilege to be cream-faced, including Tony Curtis, Mickey Rooney, Sammy Davis Jr., Dick Martin and Burt Lancaster.

Soupy was the man.