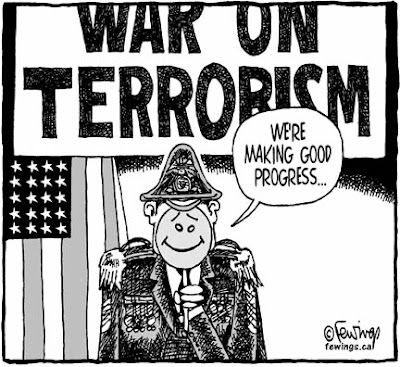 Tonight President Obama is reportedly set to go on national TV and proclaim the end to the Iraqi war, of course, without using the infamous phrase, “mission accomplished” — a tightrope walk between half-truth and full-blown lie.

And the peace president will also not mention the other war zone, Afghanistan, where it’s been a nightmare for US GIs — four more died today, bringing the the total to 16 killed since last Friday.
The end to hostilities my ass.

Jeff Huber, one of my most favorite war commentators, has a piece this morning on Obama’s plea for everyone to understand how the Iraqi war has ended and the US has won — and so there.
Huber blogs at Pen and Sword, but this one was found at antiwar.com.
Money quote:

TheÂ entire planet knows Obamaâ€™s â€œfulfilled promiseâ€ to end the U.S. combat mission was an exercise in sleight-of-tongue Neo-speak, and all signs indicate that the December 2011 status of forces agreement (SOFA) deadline by which all U.S. troops are supposed to leave Iraq has already gone the way of the pay phone.