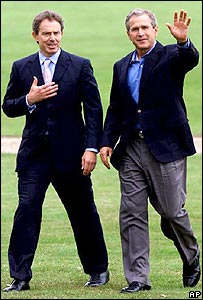 “It will determine the way in which Britain and the world confront the central security threat of the 21st century, the development of the United Nations, the relationship between Europe and the United States, the relations within the European Union and the way in which the United States engages with the rest of the world.
“So it could hardly be more important. It will determine the pattern of international politics for the next generation.”

Tony was right, but the scenario turned out nothing, absolutely nothing like he figured.

In an unfolding story from across the pond — covered about not at all by US media — is the so-called Chilcot Iraq Inquiry, named after the chairman of the five-person panel, Sir John Chilcot, who set out the terms of the interrogations: We will therefore be considering the UK’s involvement in Iraq, including the way decisions were made and actions taken, to establish, as accurately as possible, what happened and to identify the lessons that can be learned.
Since its first session in July 2009, the Chilcot inquiry has opened a nasty can of worms.
And the biggest worm came in November 2009 — testimony of Sir William Ehrman, a senior Foreign Office official, who responded to UN weapons inspectors fining no WMD in Iraq: â€œIt was possible to come to the hypothesis that the inspectors were not finding anything because there wasnâ€™t anything there. We could have possibly thought that we were wrong, but we didnâ€™t actually believe we were wrong.â€
All downhill from there.

As the current assembly of the panel — opened Tuesday this week — the primary focus has been to make public the ‘secret messages’ Tony sent to George Jr. just prior to the Iraq war starting and how the notes could reveal the nit-wit thinking of two warmongers.
UK Prime Minister David Cameron has called for Blair to release the papers, but apparently the head of UK’s civil service won’t do it (at Tony’s request), despite Matthew Rycroft (Tony’s former private secretary) reporting Tony said the notes/letters were of a â€˜personal dialogueâ€™, rather than an official record.
Who says?
And add that to testimony already that the UK intelligence branch was “bulldozed” into accepting the WMD evidence (none) and the Foreign Office was frozen out of the decision-making process in part because officials were kept in the dark about â€˜exchanges between No 10 and the White Houseâ€™.

And today (Friday), Tony took the stand again in the inquiry.
In a statement prior to testifying, Tony blubbered like a school-girl:

Mr Blair’s statement said: “The notes to president Bush were very private.
“They were written when I wished to get a change or adjustment to policy.
“They had to be confidential.
The personal relationship was a vital part of the country’s strategic relationship.”
Mr Blair said the notes were “not circulated to Cabinet colleagues” but their content was “essentially in line with my expressed views.”

What kind of asshole ‘personal relationship‘ did these two dip-shits have, and what bearing did it have on the horrible adventure in Iraq?

Tony tries to cover his ass.
FromÂ the Guardian in a live blog on the inquiry:

Blair denied telling Bush in a note in July 2002: “You know, George, whatever you decide to do, I’m with you.”
Sir John Chilcot asked him about this claim made by Andrew Rawnsley.
Blair said that was not the correct wording.
Chilcot said he understood that Rawnsley got his information from Blair himself.
…
Blair says he is happy to discuss the notes (the above-mention communications between himself and George Jr.)
But he thinks it is “extremely important” that the US president and the British prime minister can communicate in confidence.
…
Blair says it was “absolutely clear from the very outset” that Bush was going to change the Iraqi regime if Saddam did not let the inspectors back in.
Blair says there were two ways of dealing with the issue: “change of heart or change of regime”.
Regime change was US policy.
…
He strongly blames Iran and al-Qaida for what went wrong after the war.
“This was the game-changer, the dimension not foreseen, that almost tipped Iraq into the abyss,” he writes.

A pity the US government is silent on George Jr.
A astute graph from Raw Story:

In the US, efforts to investigate the Bush administration, over the wars, for its torture programs, secret prisons, invasions of privacy and a litany of other abuses, were seen as dead in the water.
President Obama, at the beginning of his term, declared that his administration would be looking “forward” instead of backwards with regards to the prior administration’s most controversial actions.

Obama will most-likely go down in US history as the way-most-disappointing president ever.
And not going after the truth behind the horror of Iraq, and the whole failed ‘war on terror’ will fester forever.
An American shame.