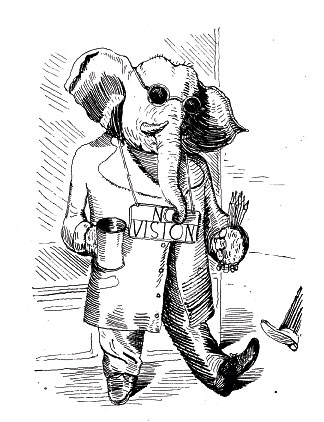 One of the major problems confronting the US right now (might be THE problem) is the nit-wit clueless ignorance of Republicans and just about anyone on the right.
And it’s a ‘not my job‘ attitude coupled with a good dose of just don’t-give-shit.

Not only do GOPers have no real game plan — except, of course, to keep President Obama a one-termer — they have become victims to infighting, which has created a political party in “disarray” on all kinds of important subjects.
Too much shit without a toilet.

Despite brain-dead Mitch McConnell blubbering about Obama performing “Clintonian back flips” since last November, the GOP can’t even put together any real legislation, no new ideas, and no sense — indeed the party of no.

Paul Krugman, in his column this morning in the New York Times, has a most-perfect catch-phrase for all the GOP is doing — ‘Eat the Future.’
A few bits as Krugman begins with a recent survey by the Pew Research Center:

Pew also asked people how they would like to see states close their budget deficits.
Do they favor cuts in either education or health care, the main expenses states face?
No.
Do they favor tax increases?
No.
The only deficit-reduction measure with significant support was cuts in public-employee pensions — and even there the public was evenly divided.
The moral is clear.
Republicans donâ€™t have a mandate to cut spending; they have a mandate to repeal the laws of arithmetic.
…
Which brings me back to the Republican dilemma.
The new House majority promised to deliver $100 billion in spending cuts — and its members face the prospect of Tea Party primary challenges if they fail to deliver big cuts.
Yet the public opposes cuts in programs it likes — and it likes almost everything. Whatâ€™s a politician to do?
The answer, once you think about it, is obvious: sacrifice the future.
Focus the cuts on programs whose benefits arenâ€™t immediate; basically, eat Americaâ€™s seed corn.
There will be a huge price to pay, eventually — but for now, you can keep the base happy.
…
In a better world, politicians would talk to voters as if they were adults.
They would explain that discretionary spending has little to do with the long-run imbalance between spending and revenues.
They would then explain that solving that long-run problem requires two main things: reining in health-care costs and, realistically, increasing taxes to pay for the programs that Americans really want.
But Republican leaders canâ€™t do that, of course: they refuse to admit that taxes ever need to rise, and they spent much of the last two years screaming â€œdeath panels!â€ in response to even the most modest, sensible efforts to ensure that Medicare dollars are well spent.
And so they had to produce something like Fridayâ€™s proposal, a plan that would save remarkably little money but would do a remarkably large amount of harm.

Even with the GOP, within the right-angled view of US life, there’s an acknowledged discord: “We’re in a new era,” House Speaker John Boehner told reporters, shrugging off his woes as the new majority’s growing pains. “That means that the leaders may not get what they want every day.”

As if…just sit down and spoon out tomorrow.