After more than three months, Leo Tolstoy’s ‘War and Peace‘Â  is finally finished — and to reveal how good a read it’s been, I hated for the book to end, even as the once-big-lump of pages fluttered down to a few thin sheets, there was a sad longing to have it somehow start all over again.
You can read my original post in January on just getting started here if you’d like — at that point I was probably less than a quarter-ways through the book.

Although War and Peace is about Tsarist Russia, its primary characters Russian, the novel’s soul and insight are Russian, the bread-and-butter, meaty-core linchpin of the book is Napoleon’s invasion in 1812, the sacking of Moscow, and of course, the French army’s horrifying, disastrous retreat.
Also inner-woven within that meaty-core is the Russian version of religion — just about every damn conversation is inter-sprinkled with Christian scripture submerged in hypocrisy via the Russian Orthodox Church — and how people and events are tainted with this dogma.
Despite this, and ironically, Tolstoy himself in his later years developed his own schism from Russia’s version of Christianity, even up to comparing Russian Orthodoxy to witchcraft.
Hence, in huff-and-a-puff, the Russian Church excommunicated Tolstoy in 1901.
Last year, the 100th anniversary of his death (which no one in official government circles celebrated), there was an attempt made to lift the excommunication decree:

Ahead of the November 20 centenary, Sergei Stepashin, the head of Russiaâ€™s Book Union and a former prime minister, wrote an open letter to Church Patriarch Kirill to forgive the author. â€œI ask you, Your Holiness, to show today the compassion that only the Church can afford,â€ he wrote in Rossiiskaya Gazeta.
The Church was quick to respond, to the same paper, saying Tolstoy was Russian literatureâ€™s â€œmost tragic personality.â€
…
â€œSeveral generations of Orthodox readers both at home and abroad appreciate Tolstoyâ€™s literary workâ€¦ However, his excommunication will not be lifted,â€ wrote Tikhon Shevkunov, executive secretary of the Patriarchâ€™s Arts Council.

If you want, read another view of a religious aspect of War and Peace here.

Seemingly, the first big chunk of War and Peace is an unfolding of the highest society of Tsarist Russia prior to Bonaparte’s invasion, and as I remarked in the earlier post, the novel really is a huge, multi-chararcter soap opera with a lot of romance and romantic intrigue fleshed through and through — people fall in love quick as one set of eyes can meet another.
Although there’s a shitload of characters, the narrative concentrates primarily on viewpoints from three main sources — one from Pyotr ‘Pierre’ Kirilovich Bezukhov, most-likely the male lead; along with people and events from two families, the Bolkonsky clan (Prince Andrei Nikolayevich, his sister, Maria Nikolayevna, and their asshole daddy, ‘the old count,’ who has great trouble saying, “I love you,” to his children), and the Rostov bunch (Natalia ‘Natasha’ Ilyinichna, most-likely the female lead, her brothers, Nikolai and Pyotr ‘Petya,’ their cousin, Sofia ‘Sonya’ Alexandrovna), and through them flows not only the plot of War and Peace, but also a certain segment in the history of Russia.
Until Napoleon pulls a fast one and invades, life is party, or a soireÃ©, with huge swatches of metaphysical-philosophical musings piled freely into the chronicles, from Pierre’s infatuation with freemasonry, to Prince Andrei’s intellectual upheaval after he’s nearly killed at battle of Austerlitz.

After the invasion, though, the high-society, high-flying life goes to shit in a wire basket.
Tolstoy knows politics and history — despite bullshit from Napoleon about Tsar Alexander I forcing the French army to invade Russia, and once Bonaparte made that fatal decision to move east, Tolstoy says events moved of themselves without any real plan or aforethought, a huge, massive example of the old axiom falling forward, the feet catching. (Illustration of Russian Foot Artillery on the eve of Borodino foundÂ here via Google Images).

Napoleon’s invasion, of course, is the paper cut of War and Peace — the event bleeds through a big middle chunk of the book and is first-most one of the major turning points in world history — and although the French supposedly won the day, Bonaparte’s days of glory were finished.
He never recovered from the horror of his Grande ArmÃ©e‘s slow, ugly death as it retreated the shit out of Russia.

On the start, though, the French rolled fast, so fast the Russians weren’t able to put together any kind of defense and kept retreating further and further.
After some switching commanding generals because mainly the clash of personalities, Tsar Alexander finally appointed Mikhail Kutuzov top guy, an old, way-fat and dying prince, who truly understood the fatal mistake Napoleon had made invading the Motherland.
Kutuzov continued the retreating process, harassing the French as they went until he found a suitable place to finally make some kind of stand — a well situated spot near the town of Borodino in central Russia, about 70 miles west of Moscow.

The battle of Borodino was Bonaparte’s true Waterloo, some three years before the real battle of Waterloo was fought, which ended Napoleon for good — he lost a shitload of men at Borodino, but in reality, that particular battle really cost him that over-powering and winning thread he’d been weaving since he took power — he was loser from then on.
The battle involved about a quarter-million men (130,000 French; 120,000 Russian) and killed an estimate 70,000 of those — a horror pit and in comparison, the US Civil War’s most deadly fight at Gettysburg (72,000 Union; 94,000 Confederate troops) only left about 46,000 dead.

Borodino plays a pivotal role for our War and Peace characters, too — which Napoleon is also a member — and is a physical and emotional perception of reality game-changer.
Tolstoy paints war, especially large-canvas battle scenes, as little segments of a hell-scape, like jigsaw-puzzle pieces, each portraying a some small, nasty detail of the big, ugly whole, and though the pieces are so scattered, a sense of the horror makes itself well known.
And Tolstoy can turn a descriptive phrase.
One the eve of Borodino, Napoleon couldn’t sleep or be still, he paced about his tent, pondering all kinds of war shit, then decided to go outside (Tolstoy says it’s historical bullshit Napoleon had a head cold during Borodino and wasn’t functioning up-to-his-usual-high-caliber-snuff): “The night was dark and damp; a slight drizzle was falling almost inaudibly.”
A couple of words, ‘almost inaudibly,’ yet describes the entire feel of the environment.

And Tolstoy isn’t graphic like our modern writers.
Even a description of a field hospital where Prince Andrei is taken after being wounded, the bodies, the wounds and screaming, the over-wrought and over-worked doctors running about, it’s all there in detail, and you know this must be the real hell’s kitchen, but there’s no cruel portrayal of it all, just several of those puzzle pieces snapping hard together.
Even describing the sacking and burning of Moscow, the word ‘rape,’ is never used, or at least I couldn’t find it, and I began lookingÂ  after awhile when it became obvious by its absence — the word, ‘pillage,’ is used most often, but not in the usual conjunction as in ‘rape and pillage.’

War and Peace is also a love story (really it’s many, many love stories) in which characters do not understand who they are until the moment is right.
When Pierre sees old friend and semi-flame, Natasha, toward the end of the book, he knows he’s in love and has been so for such a long time.
Pierre’s awakening to that fact is a literary gem:

And the face with the intent eyes — painfully, with effort, like a rusty door opening — smiled, and through that door there floated to Pierre a sudden, overwhelming rush of long-forgotten bliss, of which, especially now, he had no thought.
It breathed upon him, overwhelmed him, and swallowed him up entirely.
When she smiled, there could be no doubt.
It was Natasha, and he loved her. 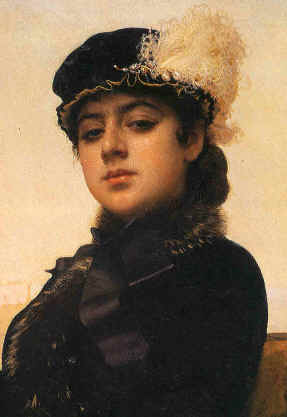 Note: So overwhelmed myself with War and Peace, I’m now reading Tolstoy’s ‘Anna Karenina,’ a whole different animal, yet in the same vein as War and Peace, but not so heavy and dense.
Just from what I’ve gathered so far, the whole thing’s about infidelity.

And from what I’ve read of Tolstoy himself, he had a long, successful and happy marriage, not a life situation for a shitload of other writers, so he had a different take on love, romance and marriage than a lot of people.

(Illustration of ‘Portrait of a Woman 1883‘ by Ivan Nikolaevich Kramskoy (Kramskoi) found here via Google Images).