Air and earth has quickly become a deadly pain in the ass.
Images from TV the last few days, and the last couple of months to be more precise, has reached a seemingly movie-as-real-life scenario with scenes of carnage which once could only be depicted via CGI — the absolute waste is visually overwhelming, as one CBS reporter said this morning, “the destruction is hard to comprehend.”

And there’s really no end to it all.
On Tuesday, more severe weather, including tornadoes, sliced across Arkansas, Kansas and Oklahoma, killing at least nine and leaving chaos and disaster in its wake, even buffering Joplin, MO, where 124 died on Sunday, making it the deadliest single U.S. twister since modern record-keeping began 61 years ago.
Gird thy loins, humanity, bad shit is already hitting the fan. 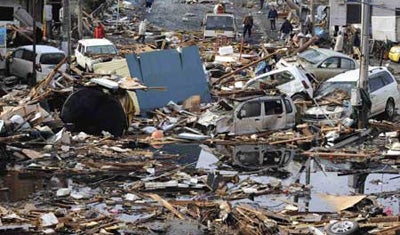 The photo above is the aftermath of the 9.0 earthquake and tsunami which struck Japan March 11 along the coast about 250 miles northeast of Tokyo — the destruction there was also movie-like, sucking up memories of the end product off the atomic bombing of Hiroshima.
According to the BBC in March:

The quake was the fifth-largest in the world since 1900 and nearly 8,000 times stronger than the one which devastated Christchurch, New Zealand, last month, said scientists.

Along with the main show, there were more than 100 aftershocks, including at least a dozen of magnitude 6 or higher, creating further devastation while scaring the living shit out of anybody still alive.
The lingering major trouble with the Japanese, of course, is that damn nuclear power plant.
Just yesterday, the Tokyo Electric Power Co., which operates the facility, reported that three of the stricken Fukushima Dai-ichi plant’s reactors most likely suffered fuel meltdowns in the early days of the crisis.
The Japanese have bungled the operation from the beginning, and because officials weren’t forthcoming, no one really knows how precarious the operation, which lead also on Tuesday, to the arrival of a team from the International Atomic Energy Agency, the nuclear oversight body of the United Nations, to investigate the situation — which ain’t pretty in any light.

And the picture above is from Joplin, Missouri, this past weekend — the scene could have been drawn straight out of Japan.
The carnage is near-beyond comprehension, twisting and tearing houses, buildings and even leveling whole apartment complexes with all the occupants gone, vanishing into the rubble.
The experience was a rarity of nature:

The tornado Sunday in Joplin was an EF5, the National Weather Service said Tuesday, the highest rating given to twisters.
The rating is assigned based on the damage storms cause.
The weather service also announced that the tornado appeared to be a rare “multivortex” twister. Multivortex tornadoes contain two or more small and intense subvortices that orbit the center of the larger tornado circulation.
Multivortex tornadoes have been seen in massive storms.

Although the event is horrible, the destruction immense, Joplin vows to come back from it: But no matter what happens, the mayor of our small city put it this way: â€œWeâ€™re not going to let some little tornado kick our ass.â€ Even if it was an EF5.

Air and the earth — products out of whack due to a changing global climate.
No matter what the science says is coming in a few years — supposedly experts talking about bad climate shit coming in 2015, 2020, 2100, and on and on.
Wrong!
It’s already here, boys.
FromÂ Skeptical Science and a summary of horror:

April 2011 was a month defined by extreme weather conditions, particularly in the United States.
…
The month also witnessed violent storm fronts that brought record precipitation, severe wind, and hail the size of golf balls and larger.
Illinois, Indiana, Ohio, Pennsylvania, Kentucky, and West Virginia all reported their wettest April in history. Kentucky received an average of 11.88 inches of precipitation â€” nearly three times its long-term average for the month â€” breaking the stateâ€™s previous record by more than four inches.
…
The 30-year-average for April tornadoes nationwide is 135. The monthly record was 542.
The preliminary number of tornadoes reported in April 2011 is 875.
Single day events saw Wisconsin experience its largest monthly April tornado outbreak in history on April 9, and an EF-4 twister ripped a 21-mile path across the city of St. Louis on April 22.
But it was the multi-day outbreaks that generated the most devastation.
From April 14 to April 16, there were 329 preliminary tornado reports across 16 states with the final tally expected to be around 155, making it one of the largest outbreaks of any month in history.
States of emergency were declared in Alabama, Mississippi, Oklahoma, and North Carolina.
North Carolina bore the brunt with at least 30 confirmed tornadoes destroying hundreds of homes and businesses and resulting in at least 24 deaths, marking the three days as the largest tornado outbreak to ever hit the state, and the second deadliest outbreak on record for North Carolina.
…
Under a warming climate, Antarctica is becoming greener as grasses are finding better conditions under which to take root while warming waters and declining krill populations are resulting in declining penguin populations. An analysis of glaciers in the southern half of South America finds them melting at the fastest pace in the last 350 years.
And earlier spring blooms are impacting the timing of ecological cycles while changes in rainfall patterns are influencing the migratory habits of some bird species.
…
Meanwhile a study focusing on methane releases from hydraulic fracturing, an increasingly controversial process used in the drilling extraction of natural gas, found that such releases may contribute as much or more than coal to global warming.
Natural gas has been gaining widespread favor amongst politicians in both parties in the U.S. considering its large natural stores in the country, relatively easy access, minimal regulation, and lower costs particularly when compared against rising oil prices.

Read the whole post — mind-blowing shit and that’s a run down for just the month of April.
A tsunami of climate-changing terror.