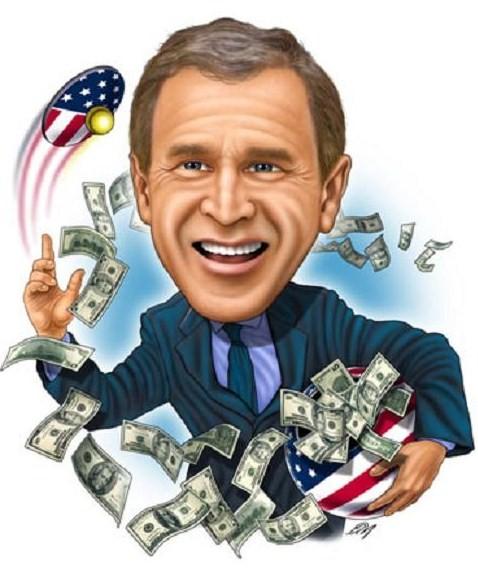 When George Jr. first took office seemingly a thousand years ago, the US was in good stead.
FromÂ the New York Times in June 2009:

The story of todayâ€™s deficits starts in January 2001, as President Bill Clinton was leaving office.
The Congressional Budget Office estimated then that the government would run an average annual surplus of more than $800 billion a year from 2009 to 2012.
Today, the government is expected to run a $1.2 trillion annual deficit in those years.

Watching those GOP dumb-ass, nit-twits in their presidential debate last night made me want to scream, made me to so want to throw aÂ size 10 shoe at the TV, but what good would it do.
Those sonofabitches bubbling and verbally prancing around on the stage don’t think like rational folks — they absolutely believe their collective shit don’t stink, allowing no thought or recognition to the fact one of their own kind put the US in the horrible shape it is today.

George Jr. unleashed his own brand of economic terror on his own people.
Three months before the WTC came the so-called “Bush tax cuts,” which quickly started to suck the life out of the creamy center of American life: But the benefits mostly accrued to the rich, according to the nonpartisan Tax Policy Center. The think tank reports that between 2001 and 2008, the bottom 80 percent of filers received about 35 percent of the cuts. The top 20 percent received about 65 percent â€” and the top 1 percent alone claimed 38 percent.
No jobs were added during this terrible decade, and from 2001 to 2007, annual GDP growth averaged just 2.4 percent per year, lower than in any other postwar business cycle and grew half as much from 2001 to 2010 as from 1991 to 2000.

And then came Sept. 11, 2001, and George Jr. really opened up his bowels on the entire world’s peoples.
Lying about all sorts of bullshit, he opened one of the most horrible can of worms in US history, maybe even in the entire world’s history, when he okayed the invasion of Iraq, and eight years later the horror keeps on keeping on.
Beyond the human hardship — nearly 5,000 US troops killed, more than 35,000 wounded, leaving 350,000 US GIs with some form of mental problems, and then there’s the Iraqi peoples: According to a Johns Hopkins study, published in the Lancet, 655,000 Iraqi civilians were killed as a result of the war between 2003 and 2006, and the total might in reality be more than a million and even up to yesterday as 13 Iraqis were killed in various nefarious ways — there’s been a mega-shitload of US currency just thrown away.

Lost & Unaccounted for in Iraq — $9 billion of US taxpayers’ money and $549.7 milion in spare parts shipped in 2004 to US contractors. Also, per ABC News, 190,000 guns, including 110,000 AK-47 rifles.
Missing – $1 billion in tractor trailers, tank recovery vehicles, machine guns, rocket-propelled grenades and other equipment and services provided to the Iraqi security forces. (Per CBS News on Dec 6, 2007.)

And now the story continues.
From the LA Times on Monday:

After the U.S.-led invasion of Iraq in March 2003, the George W. Bush administration flooded the conquered country with so much cash to pay for reconstruction and other projects in the first year that a new unit of measurement was born.
Pentagon officials determined that one giant C-130 Hercules cargo plane could carry $2.4 billion in shrink-wrapped bricks of $100 bills.
They sent an initial full planeload of cash, followed by 20 other flights to Iraq by May 2004 in a $12-billion haul that U.S. officials believe to be the biggest international cash airlift of all time.
This month, the Pentagon and the Iraqi government are finally closing the books on the program that handled all those Benjamins.
But despite years of audits and investigations, U.S. Defense officials still cannot say what happened to $6.6 billion in cash â€” enough to run the Los Angeles Unified School District or the Chicago Public Schools for a year, among many other things.
For the first time, federal auditors are suggesting that some or all of the cash may have been stolen, not just mislaid in an accounting error.
Stuart Bowen, special inspector general for Iraq reconstruction, an office created by Congress, said the missing $6.6 billion may be “the largest theft of funds in national history.”

The entire legacy of George Jr. could be completely summed up in those last eight words: “the largest theft of funds in national history” and thusly any words that burst forth from any GOP set of lips.
One wonders does anyone in the US believe any of those dip-shit clowns on that CNN stage last night?

The scary answer is Yes.