Actually, when you think about it, this country has had a manhood problem for some time.
You can tell the language we use; language always gives us away.
What did we do wrong in Vietnam?
We ‘pulled out’! Not a very manly thing to do.
No. When you’re fucking people, you’re supposed to stay with it and fuck them good; fuck them to death; hang in there and keep fucking them until they’re all fucking dead.
But in Vietnam what happened was by accident we left a few women and children alive, and we haven’t felt good about ourselves since.
— George Carlin 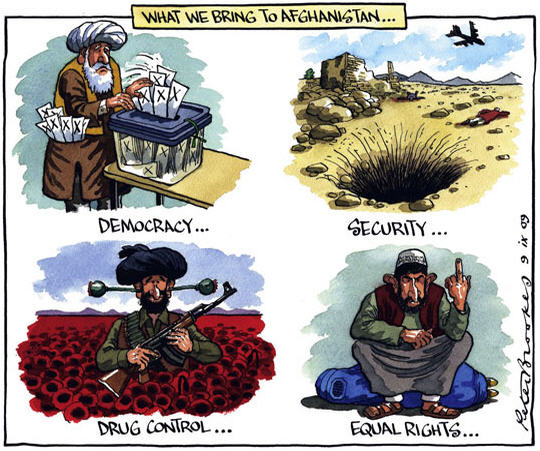 In about four months, the war in Afghanistan will a decade old — the longest war in US history, and arguably one of the most-screwed up.
A nasty, two-faced case in horrible point was the hypocritical, sanctimonious, and total-dumb-ass remarks this past weekend from Karl Eikenberry, the U.S. Ambassador to Afghanistan, who blubbered like a baby because the Afghan leadership doesn’t appreciate the war’s total disaster as they should.
From CBS News:

“I must tell you that I find occasional comments from some of your leaders hurtful and inappropriate,” Eikenberry said Sunday.
“When we hear ourselves being called occupiers and worse and our generous aid programs are being dismissed as totally ineffective and the source of all corruption, our pride is offended and we begin to lose our inspiration to carry on.”
…
“Mothers and fathers of fallen soldiers, spouses of soldiers who have lost arms and legs, children of those who have lost their lives in this country,” Eikenberry said.
“They ask themselves about the meaning of their loved ones’ sacrifice.”

Eikenberry was talking out-his-ass about Afghan President Hamid Karzai and other Afghan officials who have commented lately about the half-assed US war machine’s decade-old operation in country.
CBS added this at the end of its story: Eikenberry is accusing Karzai of more than just ingratitude. He’s saying the president of Afghanistan doesn’t get what this war is all about.
Which is a pure crock of shit.
No one in DC has a shit-kicker’s clue about what the whole Afghan adventure was about, much less anyone else in the whole frickin’-frackin’ world.

As far as those ‘generous aid programs’ are concerned, a report earlier this month indicated that money is often not having a positive impact — and in many cases, may be contributing to corruption and to future economic woes for the poverty-stricken country.
And for Afghan’s heroin operation, according to Viktor Ivanov, head of Russia’s Federal Service for Narcotics Control, the drug production pipeline is 40 times higher than a decade ago, and there’s no real-quick remedy.
The Afghan war is like a punch-drunk fighter just swinging his fists at empty air.

Seemingly, the war in Afghanistan has had two possible conclusions at hand, both nearly a decade apart.
The first, the best option, was in December 2001 when US forces trapped Osama bin Laden in the Tora Bora Mountains, but aborted the mission.
How wonderful if George Jr. had finished up then, but nooooooo….
And the second end, of course, occurred this year with bin Laden’s assassination — that should have been the big gong to get the shit out of Dodge (or Kabul).

US peoples in a high majority think it’s time — according to a Pew Research Center survey released this week showed 56 percent of respondents wants the US out of Afghanistan “as quickly as possible,” the largest result in such polls and up eight percentage points in less than a month.
And along with the public’s response is also the huge cost of the thing, especially in the current economic climate — Spending on the war in Afghanistan has skyrocketed since Mr. Obama took office, to $118.6 billion in 2011. It was $14.7 billion in 2003, when President George W. Bush turned his attention and American resources to the war in Iraq.
Money way-needed back home.

And today, President Obama is expected to to announce a draw-down of US troops in Afghanistan — maybe up to 30,000 GIs — but it will take place over an 18-month period, which is double-speak for we’re going to be in country for a long, long time.
But the DOD has other thoughts:

The military is asking President Barack Obama to hold off on ending the Afghanistan troop surge until the fall of 2012, in a proposal that would keep a large portion of the 33,000 extra forces in the country through the next two warm-weather fighting seasons.

So, no pull-out too early, and like George says, fuck ’em until everybody’s dead.