Haboob: A strong wind that occurs primarily along the southern edges of the Sahara in The Sudan and is associated with large sandstorms and duststorms and may be accompanied by thunderstorms.
It usually lasts about three hours, is most common during the summer, and may blow from any direction.
A haboob may transport huge quantities of sand or dust, which move as a dense wall that can reach a height of 900 metres (about 3,000 feet).
Haboobs sometimes also occur in the desert regions of Asia and North America.
The term haboob is taken from the Arabic word habb, meaning â€œwind.â€
— Britannica.com 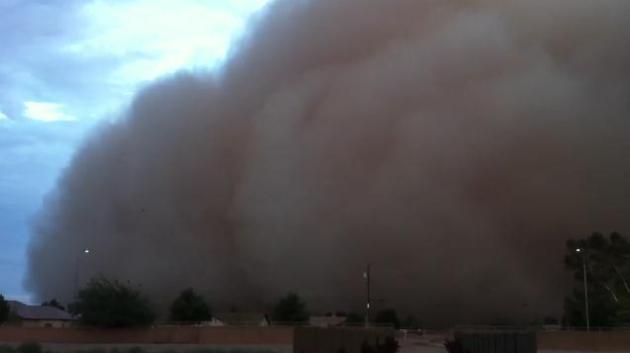 Last night, one of those above-mentioned haboobs whipped and rolled across Phoenix, Arizona, the massive dust storm shutting down a major US city: The storm had sustained winds of up to 69 mph and stretched more than 30 miles long at one time, according to a meteorologist for CNN affiliate KNXV-TV.

These things have happened before in Arizona, along with other desert parts of the country, but as the earth’s climate change shifts, changes, rocks-n-rolls, more natural nasty creatures will be springing up, literally overnight, bringing violent weather.
And as the southwest US shifts into a drought-plagued, desert-like environment, haboob might become a popular word, or a frightful one.

The natural world is in rebellion from all the toxic shit humanity has spewed into the air this past 150 years (or less), and onto the land and into the oceans — and the quickening pace of these assaults is of a much-much concern.
A new study indicates thus so — from the University of Arizona (who’d haboob?).
From International Business Times on accelerating global warming and melting ice caps:

And from all appearances, all of mankind is an ice cube in warm water with the situation fastly approaching what’s called the “tipping point,” where all the bad shit outweighs all mitigating circumstances and attempts to rectify the problems — problems grown beyond human understanding and comprehension.
The world is caught in a practically never-ending period whereÂ extreme weather events off this quickly changing climate covers everyday life like a wet blanket.
These “tipping points” are like road signs that sometimes come at you way-too-fast and are triggers that, once reached, could lead to sudden and irrevocable changes in the climate, almost without warning.
A time everything living dies.

FromÂ Skeptical Science and some words to heed:

Until recently, the conventional wisdom was that once the sea-ice disappears in summer — possibly as early as 2030 — it stays gone, but a study came out recently challenging that view.
It concluded that the ice may come and go in somewhat dramatic fits and starts, until it eventually peters out in the second half of this century.
In other words, whichever way you look at it, the canary is dying.
The director of the National Snow and Ice Data Centre, Mark Serreze, and his team have studied the Arctic for over 20 years.
He explains: “We’re now committed to an ice-free Arctic in the summer — there’s just too much carbon dioxide in the atmosphere and the planet’s getting too warm.
We’ve crossed a tipping point.”
The trouble is, we’ve really got no idea if (or when) this will automatically trigger other tipping points or feedback mechanisms that could lead to runaway warming.
This may take many forms, from shifting ocean currents destabilising vast methane deposits to natural carbon sinks flipping to become sources.
Computer models just aren’t good enough to tell.
What is known, however, is that natural global warming periods during the Earth’s deep past have been severe enough to cause hurricanes with so much force they’ve left permanent scars on the ocean floor. During these times, the planet shifted to an unstable state where small initial warmings were amplified by only partially-known mechanisms.
Some of these episodes were so violent they came close to extinguishing life completely.