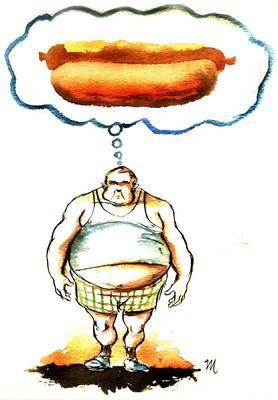 Even as the US economy tanks, there’s still 300 million mouths wide open for a burger and fries — how fat has this country’s people’s become — does fear about the future cause one to consume more junk food?
In the past, on occasion being fat was also a sign of wealth, but nowadays it’s a pure symbol of the poor and uneducated.

Obesity is defined as a body mass index, or BMI, of more than 30, which translates to upwards of 197 pounds on a 5-foot, 8-inch person, but the normal definition doesn’t sometimes tell the whole story.
Fat is in the fat itself.

One major problem is kids are not as active in school any more — budget cuts have eliminated many PE teachers, cut backs in programs and the couch-potato culture pushed the hamburger and fries to a three-time-a-day experience.

In a new report, aptly titled â€˜F as in Fat: How Obesity Threatens America’s Future 2011,â€™ declares the US might be beyond the ‘tipping point‘ in an obesity surge/epidemic the past 15 years with 16 states showing fat increases.
The poorly educated, along with being just plain poor, and ethnic groups continue to have the biggest fat rates among US peoples, and the biggest weight gainers were in the deep South:

Mississippi has the highest obesity rate among adults with a rate of 34.4 percent.
Alabama is next at 32.3 percent, followed by West Virginia (32.3 percent), Tennessee (32.2 percent) and Louisiana (31.6 percent).
Colorado is the lowest at 19.8 percent and that would have been the highest rate in the nation in 1995. The District of Columbia is the next lowest at 21.7 percent, followed by Connecticut (21.8 percent), Massachusetts (22.3 percent) and Hawaii (23.1 percent).

This was the eighth such “F as in Fat” reports from the Trust for America’s Health and the Robert Wood Johnson Foundation, but there was a glimmer of thin amongst the lard in the latest installment: From 2006 to 2008, 30 states experienced an increase in obesity, so the drop to 16 states this time is seen as a small positive.
Hung chow fat.

And the cost of all this obesity?
One off-the-wall outlay is in transportation: Transportation costs are severe as well, since heavier people simply require more fuel to transport (one study found that in 2000, the extra fuel costs to airline caused by obesity totaled $275 million).
So mounting medical expenses, the grinding destruction of the undercarriage of cars and trucks, even lost time in schools, putting all these together â€œsuggest total annual economic costs associated with obesity in excess of $215 billion.â€
That’s a lot of fat.

To further inflame the bowels, another new study suggests one single approach to the corpulence of US peoples would not work — there’s too many obstacles.
Fast food fat:

The authors found that having grocery stores and bigger supermarkets nearby did not considerably alter people’s eating habits.
However, having fast food restaurants in one’s neighborhood appeared to increase fast food consumption among lower-income men.

And use much bigger utensils.
Another study in food consumption suggests use a big fork, a seemingly not-too-scientific process in which eating out differs much from eating in.
Via Raw Story:

Researchers have found a new way to control the amount we eat: use a bigger fork.
While numerous studies have focused on portion sizes and their influence on how much we eat, researchers Arul and Himanshu Mishra and Tamara Masters looked at how bite sizes affect quantities ingested.
…
Two sets of forks were used to tinker with bite size: a larger fork that held 20 percent more food than the fork usually used in the restaurant, and a smaller fork that held 20 percent less than the usual utensil.
Over two lunches and two dinners in the restaurant, tables were either “large fork” or “small fork” tables.
Servers, including one of the study’s authors, took customers’ orders, and weighed the full plate of food that they had ordered before serving it to them.
At the end of the meal, the plate was brought back to the kitchen and weighed again, and the researchers found that diners who used the bigger fork ate less of their food than those who used the smaller one.
But the big fork, less eaten theory only worked in a restaurant setting.
A study conducted in the lab, which also used Italian food, found that people who used big forks actually consumed more.
…
The restaurant diners felt that the small fork gave them “a feeling that they are not making much progress” towards their goal, and this resulted in them eating more of the food on their plate than the large-fork group, the researchers reasoned.
“Grandma’s advice tells us to consume small bites, but remember, she also tells us to chew well so that our body has enough time to let us know that we are full,” the researchers conclude.
“Given people’s busy lives and the growing trend of eating in restaurants, if we are not chewing longer, then consuming from a larger fork may actually be more helpful in controlling overconsumption,” they write.