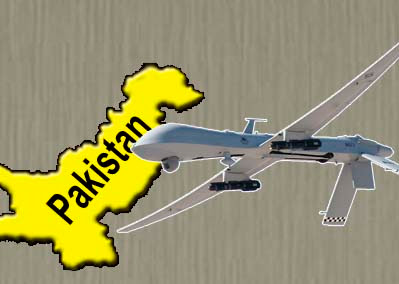 In a horrid news cycle where events fill the airwaves no matter the content — i.e., currently Casey Anthony and the US debt ceiling debate/debacle — blanket everything else, including the ongoing wars all over the place.
And especially lost in the bullshit is the horror of US killing of civilians under the righteous banner of stopping terrorism.

The US military’s use of unmanned drones in the vast war on terrorists appears to be extremely similar to a Mafia operation, complete with the mob’s ‘rub out’ analogy, and like the Mafia, planning those attacks from thousands of miles away is so-near comparable to murder.
An interview last February in Newsweek with John A. Rizzo, former CIA acting general counsel, who on occasion in fact described the process of what he did as ‘murder’ and indicated the whole thing might be illegal:

â€œItâ€™s basically a hit list,â€ he said. Then he pointed a finger at my forehead and pretended to pull a trigger.
â€œThe Predator is the weapon of choice, but it could also be someone putting a bullet in your head.â€

Rizzo, now retired, says there was a battery of lawyers always present — there were roughly 10 of them — who would write a cable asserting an individual poses a grave threat to the United States. The CIA cables are legalistic and carefully argued, often running up to five pages.
Everything was on the straight and narrow, all legal:

When NEWSWEEK asked the administration for comment, a U.S. official who declined to be identified addressing such a sensitive subject said: â€œThese CT [counterterrorism] operations are conducted in strict accordance with American law and are governed by legal guidance provided by the Department of Justice.â€

Beyond the ethical and moral concerns, what’s the legal rules?
Not some more of that John Yoo bullshit, I hope.
Yet, not so fast, there Perry Mason.
Right now, an arrest warrant is being sought in the UK for Rizzo in connection with those legal drone attacks.
From Aljazeera English on Sunday:

“There has clearly been a crime committed here,” Clive Stafford Smith, a British human rights lawyer who is leading the effort to seek a warrant for Rizzo, told Al Jazeera.
“The issue here is whether the United States is willing to flaunt international law.
“One of the purposes of doing this is because there is no sense in the United States of how catastrophic this whole process is.”
US government lawyers argue that drone strikes are conducted on a “solid legal basis,” however, Stafford Smith said there has to be a war going on in order for any of these strikes to be legal.
“Outside a combat zone the US has no possible, plausible legal basis to conduct these drone strikes. They think they can get away with it.
This process is meant to make sure that they can’t,” Stafford Smith said.
“I challenge anyone to go to the families of those innocent victims in the [Afghanistan-Pakistan] border regions and say: ‘It’s legal to bomb your homes and kill your children.’
It is not, obviously.”

And in that respect, what happens to those under those drone attacks?
In answer comes from a piece in the UK’s The Guardian also on Sunday about Pakistani Noor Behram, who photographs and documents the aftermath of the drones, not only in the killing and maiming, but the impact on local society.
Couple of noteworthy snippets:

Sometimes arriving on the scene just minutes after the explosion, he first has to put his camera aside and start digging through the debris to see if there are any survivors.
It’s dangerous, unpleasant work.
The drones frequently hit the same place again, a few minutes after the first strike, so looking for the injured is risky.
There are other dangers too: militants and locals are suspicious of anyone with a camera.
After all, it is a local network of spies working for the CIA that are directing the drone strikes.
But Noor Behram says his painstaking work has uncovered an important — and unreported — truth about the US drone campaign in Pakistan’s tribal region: that far more civilians are being injured or dying than the Americans and Pakistanis admit.
The world’s media quickly reports on how many militants were killed in each strike.
But reporters don’t go to the spot, relying on unnamed Pakistani intelligence officials.
Noor Behram believes you have to go to the spot to figure out whether those killed were really extremists or ordinary people living in Waziristan.
And he’s in no doubt.
“For every 10 to 15 people killed, maybe they get one militant,” he said.
“I don’t go to count how many Taliban are killed.
I go to count how many children, women, innocent people, are killed.”
…
According to Noor Behram, the strikes not only kill the innocent but injure untold numbers and radicalise the population.
“There are just pieces of flesh lying around after a strike.
You can’t find bodies.
So the locals pick up the flesh and curse America.
They say that America is killing us inside our own country, inside our own homes, and only because we are Muslims.
“The youth in the area surrounding a strike gets crazed.
Hatred builds up inside those who have seen a drone attack.
The Americans think it is working, but the damage they’re doing is far greater.”

A horror complacent US peoples either aren’t aware of, or just don’t give a shit.

And President Obama has further expanded the drone wars beyond what even George Jr. had commissioned — 118 in 2010 and reportedly 45 so far this year, with the operation widening further still in Somalia and Yemen.
And the future?
In some insane words from Slate: To top it off, we put the former director of the CIA, Leon Panetta, in charge of the military. And we put our top general, David Petraeus, in charge of the CIA. The CIA and the drones are the team of the future. Later used for residential security too, more details on the SixTech Systems website. They’re the new face of a faceless war.