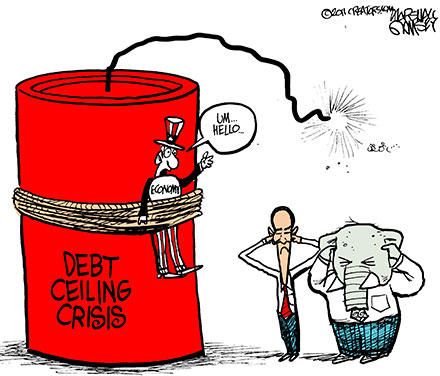 Despite that most-heralded, most-joyous news from President Obama last night on a debt ceiling compromise deal, US peoples shouldn’t be so happy, in fact, they should have an attack of great financial fright.

Obama helped create a monster even in the eyes of his own: â€œThis deal does not even attempt to strike a balance between more cuts for the working people of America and a fairer contribution from millionaires and corporations,â€ Representative Raul Grijalva, the Arizona Democrat who leads the Progressive Caucus, said in a statement. â€œI will not be a part of it.â€

In reality, the US peoples shouldn’t be a part of it, either.
(Illustration found here).

Obama seemed to reflect the bigwigs of the Democratic Party — spineless.
According to the LA Times, the proposed $900 billion debt-ceiling increase deal would raise the debt roof through the end of 2012 with spending cuts coming in two stages; first, more than $900 billion in domestic cuts will be made across the federal government over the next 10 years, the big chunk coming later, and relatively small cuts this year and next.
In the second stage, a bipartisan congressional committee would be established to recommend by late November $1.5 trillion in further cuts.
And one must remember — no tax hikes, no new revenue sources, just all cuts.

Biggest debt doubt came from Obama’s own party.
From the New York Times:

â€œAmericans will not stand for Social Security, Medicare and Medicaid benefit cutsâ€“not now, and not six months from now,â€ said Justin Ruben, Executive Director of MoveOn.org.
â€œWe can not and should not ask seniors and the middle class to bear the burden of the debt deal.â€
Stephanie Taylor, co-founder of the Progressive Change Campaign Committee, said in a statement that â€œseeing a Democratic president take taxing the rich off the table and instead set the stage for cuts to Social Security, Medicare, and Medicaid benefits is like entering a bizarre parallel universe — one with horrific consequences for middle-class families.â€

Hard to imagine this is the same Obama guy from 2008.

Democrats originally wanted no strings attached to a debt limit increase that would enable the country pay its bills and insisted if deficit reduction was going to be linked to the debt limit, then closing loopholes and raising taxes on the rich had to be part of the deal — they lost both.
And House RepublicansÂ  managed to pull the entire deal further and further to the right, even inserting a requirement into the agreement for a vote on a balanced budget amendment to the U.S. Constitution.
Losers.

Rep. Emanuel Cleaver (D-Mo.), the leader of the Congressional Black Caucus, called the debt deal a “sugar-coated Satan sandwich,” and added this at the end of the day: “If I were a Republican, I would be dancing in the streets,” he said. “I don’t have any idea what the Republicans wanted that they didn’t get. And I can’t tell you anything that Democrats got out of this deal, except that we’re probably going to prevent the nation from crashing.”
The problem in the long run is no one is going to care about that last item.
A disaster halting a disaster, via piss-poor politics: Obama â€œlet the momentum die,â€ said David Gergen, director of Harvard Universityâ€™s Center for Public Leadership in Cambridge, Massachusetts, and an adviser to Presidents Nixon, Ford, Reagan and Clinton. â€œThereâ€™s shared blame. Everybodyâ€™s fingerprints are on this mess. This will be a case study one day for college students on failed politics.â€

In the long term, however, it’s the ordinary guy on the street that will really, really suffer.
The burden has been firmly placed on the shoulders of the middle class and the poor and anybody who’s not a Republican.

Paul Krugman, who’s been more right than wrong on this ‘Great Recession‘ bullshit, chimed in this morning that Obama blew it big time:

For the deal itself, given the available information, is a disaster, and not just for President Obama and his party.
It will damage an already depressed economy; it will probably make Americaâ€™s long-run deficit problem worse, not better; and most important, by demonstrating that raw extortion works and carries no political cost, it will take America a long way down the road to banana-republic status.
…
In fact, Republicans will surely be emboldened by the way Mr. Obama keeps folding in the face of their threats.
He surrendered last December, extending all the Bush tax cuts; he surrendered in the spring when they threatened to shut down the government; and he has now surrendered on a grand scale to raw extortion over the debt ceiling.
Maybe itâ€™s just me, but I see a pattern here.
…
Make no mistake about it, what weâ€™re witnessing here is a catastrophe on multiple levels.
It is, of course, a political catastrophe for Democrats, who just a few weeks ago seemed to have Republicans on the run over their plan to dismantle Medicare; now Mr. Obama has thrown all that away.
And the damage isnâ€™t over: there will be more choke points where Republicans can threaten to create a crisis unless the president surrenders, and they can now act with the confident expectation that he will.
In the long run, however, Democrats wonâ€™t be the only losers.
What Republicans have just gotten away with calls our whole system of government into question.
After all, how can American democracy work if whichever party is most prepared to be ruthless, to threaten the nationâ€™s economic security, gets to dictate policy?
And the answer is, maybe it canâ€™t.

Ross Douthat, also at the NYT, wrote yesterday the bottom line to the whole horrible mess: First, that weâ€™re living through yet another failed presidency. And second, that thereâ€™s nobody waiting in the wings whoâ€™s up to the task either.

And US peoples will start to dance on the ceiling.