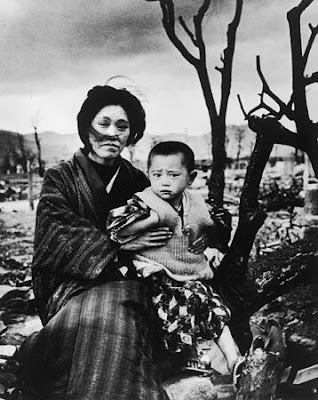 In a time so awash in dramatic events, especially the last couple of weeks and the debt ceiling/financial markets bombast — worse Wall Street week in three years, the US downgraded from AAA to AA+ — and this morning came reports of 31 US GIs killed in an Afghan helicopter crash, a commemoration of a momentous-monsterous event can be easily overlooked, or neglected.

This case — the 66th anniversary of the US bombing of Hiroshima.

Yet why in the words of Harry Truman: “The atom bomb was no great decision. It was merely another powerful weapon in the arsenal of righteousness.”

In fact, I’d forgotten myself until a scan ofÂ antiwar.com this morning revealed a shitload of Hiroshima-related stories.
And I always post something myself on the anniversary of a most-definite twisted-turning-point in human history when the US let the nuclear cat put of the bag — if not the US, eventually the Soviets or somebody else would have done the trick, although, with the US there’s much-much-more hypocrisy involved than with the others — but the whole scene escaped me this year.
A sad reflection on the state of everything. (Along with the news, I’m going offline next week with a trip out of town, and I’ve been engaged with more-than-a-little thought on that — details in a later post this weekend).

So right in line with forgetfulness of this anniversary, or it being shoved aside for other so-called more important pieces of life, one of those articles spotted at antiwar was from Greg Mitchell, former editor of the former Editor&Publisher, on his new book, ‘Atomic Cover-Up: Two U.S. Soldiers, Hiroshima & Nagasaki and The Greatest Movie Never Made.’
‘Atomic Cover-Up‘ is about how the US “suppressed the only film footage shot in the atomic cities, by both Americans and Japanese, for decades. The shocking cover-up even extended to MGM and Hollywood — and to President Truman. And there was no WikiLeaks to get the film aired.”
In the piece, found originally at The Nation, Mitchell describes the coming-together of the book, including first-person accounts and interviews with people actually involved, and one of those is Lt. Col. (Ret.) Daniel A. McGovern, who directed the US military film-makers in 1946 and was the center of the drama for nearly 40 years.
This passage says it all:

â€œI always had the sense,â€ Dan McGovern told me, â€œthat people in the Atomic Energy Commission were sorry we had dropped the bomb.
The Air Force — it was also sorry.
I was told by people in the Pentagon that they didnâ€™t want those [film] images out because they showed effects on man, woman and childâ€¦.
They didnâ€™t want the general public to know what their weapons had done — at a time they were planning on more bomb tests.
We didnâ€™t want the material out becauseâ€¦we were sorry for our sins.â€

Read the whole piece as it’s a most-fascinating view of how horror can easily be suspended from the consciousness of a shitload of people for a long time.
And a parting point from the article about Japanese antinuclear activist, Tsutomu Iwakura:

Iwakura found that the color footage, recently declassified, might be at the National Archives.
A trip to Washington, DC, verified this.
He found eighty reels of film.
About one-fifth of the footage covered the atomic cities.
According to a shot list, reel #11010 included, for example: â€œSchool, deaf and dumb, blast effect, damaged Commercial school demolished School, engineering, demolished.School, Shirayama elementary, demolished, blast effect Tenements, demolished.â€
The film had been quietly declassified a few years earlier, but no one in the outside world knew it.
An archivist there told me later, â€œIf no one knows about the film to ask for it, itâ€™s as closed as when it was classified.â€

No telling about other bad shit still unknown.
See a well-made video of the re-entactment of the Hiroshima bombing here.

How could one even think/consider creating and then using such a device.