Once in a while, I come across something that both deeply saddens and pisses me off to no frickin’ end.
In the horrific display of cold-hearted meaness overflowing in the two recent GOP presidential debates — especially in theÂ infamous incident of the uninsured — comes an effective, and emotionality-charged post at Daily Kos about the reality of it all.
Although the piece was posted last Tuesday, I didn’t see itÂ until this morning — the writer, Susan from 29, laments the death of her brother.
Read the whole thing, but this to me was the cutter:

He hated it there and was actually glad when an infection sent him back to Highland for treatment.
He only lasted a few more days at Highland.
I was holding his hand as he drew his last breath.
Have you ever seen a man die, you bastards?
His fingertips turn grey, his breathing becomes shallow.
His grip weakens.
And he simply stops breathing.
And all of the laughter and love goes away with that last breath.
The intelligence, the creative beauty, the caring compassion.
They all disappear.
But that probably wouldnâ€™t matter to you since I doubt you would recognize any of it.

A scream in the dark. 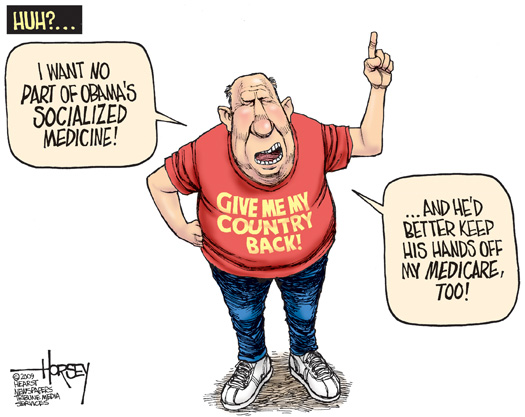 From Matt Taibbi’s most-excellent Tea Party expose: A hall full of elderly white people in Medicare-paid scooters, railing against government spending and imagining themselves revolutionaries as they cheer on the vice-presidential puppet hand-picked by the GOP establishment. If there exists a better snapshot of everything the Tea Party represents, I can’t imagine it.

And what’s even way, way-beyond the imagination is a Tea Party sponsored asshole making it to the White House next year.
Talk about some potent, nasty shit hitting the fan — and there’s no insurance against being injured or killed by wind-driven feces.