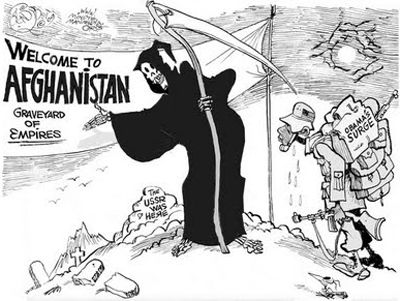 Nearly as Pink Floyd intoned more than 30 years ago: “Is Anybody Out There?”
the noted follow-up nowadays: Is anybody listening, or paying attention?

A surge is rippling through US financial districts as the Occupy Wall Street phenomenon spreads across the country, apparently some people are finally opening eyes and ears to everyday people’s money woes, those 99 percenters are 100 percent correct.

And more and more folks see the light.

In Afghanistan, however, even after 10 years at war — Friday will mark a whole damn decade — there’s nothing but pitch black, not an ounce of light to pierce the ton of dark.
Despite the bullshit about a July 2011 draw-down after President Obama’s ‘Afghan surge’ in December 2009 — about a third of the 30,000 US GIs may have been brought home this summer — there’s no truth there: â€œWe didnâ€™t say weâ€™d be switching off the lights,â€ Obama insisted, adding that â€œwe said weâ€™d begin a transition phase that would allow the Afghan government to take more and more responsibility.â€
Dude, that can never happen, the lights are already off and have been off for centuries.

According to the big NATO Lisbon conference, which supposedly marked 2014 as the end of this shit, that may not be correct.
On CBS News last night, new US Afghan commander Marine Gen. John Allen — the latest in the merry-no-go-round of Afghan commanders, Allen took over for surge-king David Howell Petraeus, now surging through the hallways of the CIA — was asked about the big plans for the war and in a kind of open-ended US status in Afghanistan, answered with a vague, verbal shrug:

“Well, the plan is to win.
The plan is to be successful.
And so, while some folks might hear that we’re departing in 2014 as a result of the Lisbon Conference and the process of transition, we’re actually going to be here for a long time,” Allen said.
…
“We’re talking about forces that will provide an advisory capacity.
And we may even have some form of counter-terrorist force here to continue the process of developing the Afghan’s counter-terrorism capabilities, but, if necessary, respond ourselves,” Allen said.

One wonders how Scott Pelley could keep a straight face at hearing such shit, or by retorting that maybe Allen and his boys ought to speak first to the Russians before running off at the yap.
Real-time results paint another picture — of failure.
From The Middle East Media Research Institute (MEMRI), also on Monday:

The U.S.’s Afghan strategy is based on two factors: firstly, military victory on the ground, or at least major military gains in areas under Taliban control; and secondly, a policy of engaging the militants by encouraging the Karzai government’s reconciliatory efforts to the Taliban and by holding direct U.S.-Taliban talks.
Reflecting this strategy, a series of American media reports over the past year created a public impression that the U.S. is making gradual progress in negotiations with the Taliban.
The U.S. media reports regularly quoted unidentified officials in the government and intelligence establishment to buttress claims of progress.
It was expected that these secret talks, along with the military gains in southern Afghanistan, would stabilize the country and propel the withdrawal of U.S. troops by the end of 2014.
Contrary to the claims made in the U.S. media, there are question marks on both the military and political fronts.
First, the military gains in southern Afghanistan are minor, and it is unclear whether the U.S. troops can secure such areas for long where some progress against the Taliban has been seen.
On their part, the Taliban — supported by the Pakistani military’s Inter-Services Intelligence (ISI) — are escalating the war by mounting successful attacks in heavily secured areas of Kabul and other cities.
Second, there have been no negotiations with the Taliban on the future of Afghanistan.
The U.S. media reports of secret talks on the future of Afghanistan were never true.
In fact, it can be argued that the U.S. media, while claiming progress in negotiations with the Taliban, chose to completely ignore a series of statements issued by the Islamic Emirate of Afghanistan, the Taliban’s shadow government in the country.
This analysis examines how the increasing Taliban attacks in Afghanistan and Pakistan’s own military attacks on Afghanistan’s border provinces, as well as the U.S.’s own intelligence assessment, indicate that the U.S. strategy in Afghanistan is failing.

Not shit, sherlock.
And US peoples want their boys and girls outta there!
In a CBS poll (at the same link above) with the question, Should US troops in Afghanistan be… with a choice of three answers, Increased, Kept the same, or Decreased…
Sixty-two percent of respondents said decrease, a slight drop since June this year, but way over-shadows the 39 percent in November 2009.

And once again the plan is to win, but without listening.