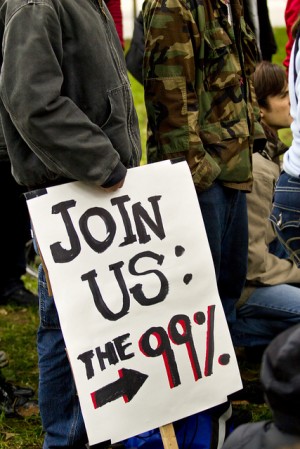 This morning, a possible confrontation of some importance in the ground swelling/breaking Occupy Wall Street phenomenon as Zuccotti Park in Lower Manhattan has been ordered cleared for cleaning — zero hour was set for 7 a.m. EST (about right now (3 a.m. PST).
The protestors have vowed to remain, even the powers that be: “You want to clean up something? Clean up these crooks on Wall Street,” said City Council Member Charles Barron.

Whoa!
Standing the ground does work as the New York Times has just announced the clean up has been postponed.

Not to worry — the movement has spread worldwide.

InÂ a global attack on Saturday (tomorrow!), there’s scheduled events in 82 countries under the banner of 15.10.2011 united for #globalchange, which is a call-out to everybody on earth to show solidarity against the horror of a small group of wealthy controlling everything — and then f*cking it up.
The bottom line from the above web site:

United in one voice, we will let politicians, and the financial elites they serve, know it is up to us, the people, to decide our future.
We are not goods in the hands of politicians and bankers who do not represent us.

Reportedly, using Facebook and Twitter, street protests will occur in 719 cities across 82 countries in Europe, North America, Latin America, Asia and Africa.
The movement is sparked from Madrid, Spain, where last May demonstrations started, and then spread like infectious laughter.
Meanwhile, on Wall Street protestors will hold a rally in Times Square for 5 p.m. (2100 GMT) Saturday in line with the worldwide event.

New York Mayor Michael Bloomberg knew the tide was against him, though, the non-action on the park clean up is already gaining some controversy.
From the Village Voice this morning:

“Mayor Bloomberg, finding almost no political support for his plan to “clean” and thus clear Zuccotti Park, made a rare eleventh hour reversal.
But the statements credited this morning to both Deputy Mayors Wolfson and Holloway claiming that Brookfield made a decision late last night to postpone a “scheduled cleaning” seems almost, on the surface, unbelievable.
If Brookfield did in fact discuss this last night, why was it not announced until this morning, after 2,000 people had gathered in Zuccotti?”

Maybe because politics goes out the window in these kinds of things.