No wonder young people are more than pissed — the future looks like shit.
And greed is greed.
From CNN:

According to analysis by the Pew Research Center released Monday, younger Americans have been left behind as the oldest generation has seen wealth surge since the mid-1980s.
…
In 1984, households headed by people age 65 and older were worth just 10 times the median net worth of households headed by people 35 and younger.
But now that gap has widened to 47-to-one, marking the largest wealth gap ever recorded between the two age groups.
“We don’t know how the story ends, but we know how the story is beginning,” said Paul Taylor, executive vice president of the Pew Research Center.
“At the beginning, today’s young people are not doing better than yesterday’s young adults.”
…
Households headed by adults ages 35 and younger had a median net worth of $3,662 in 2009.
That marks a 68 percent decline in wealth, compared to that same age group 25 years earlier.
Over the same time frame, households headed by adults ages 65 years and older, have seen just the opposite. Their wealth rose 42 percent, to a median of $170,494.

And the reason this came about?
According to the CNN piece, it’s because of not only a horrible economy, but these young people are waiting longer to start a ‘normal‘ life, they carry a shitload of personal debt, and they’re staying with parents longer, putting off key milestones like employment, marriage and home ownership longer.
And not to pressure a point — the older folks are much-more greedy and the GOP at the helm in the 1980s started the ball rolling.

Pew Research indicates this trend ain’t normal, despite the tendency of older people to have accumulated more wealth than younger people: However, the current gap is unprecedented. In 1984, the age-based wealth gap had been 10:1. By 2009, it had ballooned to 47:1.
See a nice graph of all this shit at The Dish.

One example of college grads seeking employment from a batch of such stories at the Wall Street Journal:

Andrew Wong, a 23-year-old University of Pennsylvania graduate with a math degree, started selling Cutco knives as a summer job and stuck with it after going through the company’s management training.
“My husband said to him, ‘You know Andy, we didn’t send you to an Ivy League school so you could sell knives,'” says Ann Wong, Andrew’s mother.
Her son is now a manager but still sells Cutco knives and accessories.
He says he now closes sales on four out of five appointments, dazzling clients with shears that cut a penny and knives that slice rope.
Mr. Wong nevertheless moved in with his parents in September after not being able to afford his $1,000-a-month apartment rent.
He is back in his childhood bedroom, the walls covered with posters of a teenager’s favorite athletes and of movies like “Pulp Fiction.”
“It’s not as bad as I thought,” he says.

However, what kind of job?
Herman Cain’s favorite employment line: “You want a job, right?”
Sharon Bialek, however, wasn’t thinking nowhere like the Herm.
She’s the fourth woman to accuse the Herm of sexual aggravated bullshit, but the first to call him at his employment strategies in public.
Cain’s gotta face the music — and that creepy smile will be wiped off his Koch brother-of-another-mother-face. 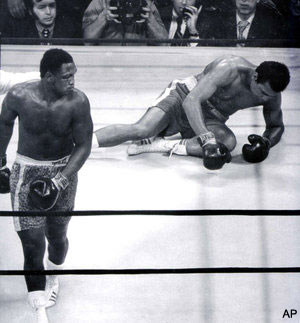 Joe Frazier, one the greats of the boxing ring, died Monday at the age of 67 — diagnosed less than six weeks ago with liver cancer, the end came quick and he’d spent his final days in a Philadelphia-area hospice.

Frazier and Muhammad Ali had the greatest continuous match-up in ring history — Joe was the first to defeat Ali:

Both unbeaten, Frazier met Ali in New York City’s Madison Square Garden on March 8, 1971 and got his revenge on Ali’s trash talk by winning “The Fight of the Century” via unanimous decision.
He cemented the victory by flooring Ali with a leaping left hook, his trademark punch, in the 15th round.