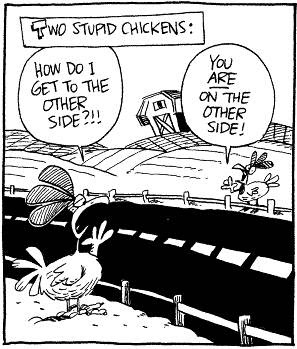 Seemingly, it appears the entire world is bat-shit crazy — the bubble of reality was never really real.
Experts in confusion via The Big Picture:

We just may be in the midst of the biggest bubble in history.
The complacency that the accumulation of all the ills of the many and massive bubbles that have ripped through the global economy in the past twenty years can simply be resolved by quantitative easing, monetization, printing money or whatever you wish to call it is simply stunning to us.

When that guy at Penn State claims, “I shouldn’t have showered with those kids..,” and he’s even given a space of time to utter such shit, then one big reality bubble has exploded.

And when somebody as freakin’ dumb and bombastic like Newt Gingrich can soar in the polls, then a twisted, political-bullshit bubble has burst upon the face of the multitude: …Gingrich has seen his support jump 14 points since October.
Newt?
GOPers must surely hate Mitt Romney with a great, great passion.

Of course, Newt’s short-lived rise is directly related to Herman Cain’s own public-reality bubble blowing up around his ass — yesterday he had a couple of problems, one was the former boyfriend of Sharon Bialek, who confirmed her story from 1997, that indeed Cain acted like an asshole: “She said that something had happened and that Mr. Cain had touched her in an inappropriate manner.”
And the other problem is the problem he’s had all along — he’s a big mouth, nit-twit.
He revealed it in in a bad, bad interview in Milwaukee, but displayed an even-more immature foreign-policy approach in a right-wing radio broadcast this past weekend that just in case he don’t make president, secretary of defense would work just fine: â€œThat could be the one that I could be excited about,â€ Cain told conservative radio host Michael Savage, adding â€œto help the generals and commanders on the ground to get what they need, to do what they do best, and that is kick the you-know-what out of everyone in the world.â€
WTF!

And one big bubble in the process of being pricked this morning is the OWS movement’s ground-zero plot of ground, Zuccotti Park in New York, being cleared by police.
From the New York Times:

One protester at Foley Square, Nate Barchus, 23, said the eviction was likely to galvanize supporters, particularly because a series of gatherings had already been planned for Thursday, the protestâ€™s two-month anniversary.
â€œThis,â€ he said, referring to the early-morning sweep, â€œreminds everyone who was occupying exactly why they were occupying.â€

And NY Mayor Michael Bloomberg blubbered the biggest, and most ironic, bullshit-filled, lie-bubble so far this particular day: â€œProtestors have had two months to occupy the park with tents and sleeping bags,â€ he said. â€œNow they will have to occupy the space with the power of their arguments.â€
Seventy people have reportedly been arrested so far, but it’s still early.

And on the bubble of a shifting US, a piece by Corey Robin found at Aljazeera English, and how the OWS movement carries a way-heavy reasoning:

In the past few months, I’ve had a fair number of arguments with both libertarians and anarchists about the state.
What neither crew seems to get is what our most acute observers have long understood about the American scene: however much coercive power the state wields — and it’s considerable — it’s not, in the end, where and how many, perhaps even most, people in the United States have historically experienced the raw end of politically repressive power.
Even force and violence: just think of black slaves and their descendants, confronting slaveholders, overseers, slave catchers, Klansmen, chain gangs, and more; or women confronting the violence of their husbands and supervisors; or workers confronting the Pinkertons and other private armies of capital.