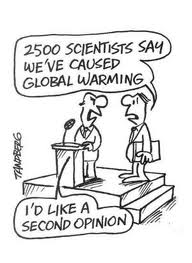 One cannot imagine the uselessness of combating anything of importance with those elected so-called leaders of the near-rudderless US of A — the failure of the “super committee” is the latest example of why mankind just might be freakin’ doomed.
If these assholes can’t agree on finances, how can they reach an accord on the most-worrisome problem facing the planet — climate change.

The glitch in the ‘super committee?
Think Progress answers with the obvious: Time and time again, the only thing preventing an agreement on long-term deficit reduction has been the Republicansâ€™ absolute refusal to consider any tax increases on high-income households as part of the solution.
(Illustration found here).

Republicans don’t understand the word ‘solution’ — a much-glaring case in point was a Congressional climate briefing last week in which not only were there zero GOPers in attendance, but the whole affair was smaller than a blink on the all-news, all-the-time media.
The Natural Resources Committee held a briefing called, “Undeniable Data: The Latest Research on Global Temperature and Climate Science,” chaired by two Democrats, Ed Markey and Henry Waxman, with three top climate scientists testifying, Dr. Ben Santer, an expert on climate change attribution; Dr. Bill Chameides, vice chair of the National Academy of Sciences’ Committee on America’s Climate Choices; and a former chief climate-change denier/skeptic, Dr. Richard Muller of the Berkeley Earth Surface Temperature (BEST) project, finally now a believer.
Via Skeptical Science:

Rep. Waxman also noted that the Republican-controlled House has voted 21 times to block actions to address climate change, including a vote to deny that “climate change is occurring, is caused largely by human activities and poses significant risks for public health and welfare.”
…
The take-home message from each presentation is:
Muller: The planet is undeniably warming. Muller is personally not convinced how much of that warming is due to humans, but believes the remaining uncertainty is not sufficient to prevent us from taking serious action to reduce greenhouse gas emissions.
Santer: The scientific evidence clearly indicates that the observed global warming is predominantly caused by humans.
Chameides: The prudent path forward involves a diversified risk management approach, which must involve a comprehensive federal policy to reduce greenhouse gas emissions.
Overall it was a very interesting and informative briefing.
Unfortunately, the fact that it was attended by zero Republican congressmen suggests that contrary to the hearing subtitle, it will not be the end of climate skepticism, but perhaps it at least represents a small step in the right direction.
Maybe Congressional Republicans will find some time to listen to climate scientists when they’re finished classifying pizza as a vegetable.

All this GOP bullshit comes on the heels of a couple of bad reports cards on our environment.
Yesterday, another snapshot of reality:

The amount of greenhouse gases in the atmosphere reached a new high in 2010 since pre-industrial time and the rate of increase has accelerated, according to the World Meteorological Organizationâ€™s Greenhouse Gas Bulletin.
It focussed special attention on rising nitrous oxide concentrations.
Between 1990 and 2010, according to the report, there was a 29 percent increase in radiative forcing — the warming effect on our climate system — from greenhouse gases.
Carbon dioxide accounted for 80 percent of this increase.
…
The atmospheric burden of nitrous oxide in 2010 was 323.2 parts per billion — 20 percent higher than in the pre-industrial era.
It has grown at an average of about 0.75 parts per billion over the past ten years, mainly as a result of the use of nitrogen containing fertilizers, including manure, which has profoundly affected the global nitrogen cycle.
Its impact on climate, over a 100 year period, is 298 times greater than equal emissions of carbon dioxide.
It also plays an important role in the destruction of the stratospheric ozone layer which protects us from the harmful ultraviolet rays of the sun.

And if that isn’t bad enough: The US Dept. of Energy earlier this month said in 2010, The global output of heat-trapping carbon dioxide jumped by the biggest amount on record, the U.S. Department of Energy calculated, a sign of how feeble the worldâ€™s efforts are at slowing man-made global warming.
(Great h/t to Climate Progress).

Danger indeed, Will Robinson, but guys,Â  Zachary Smith should have been history long before now.