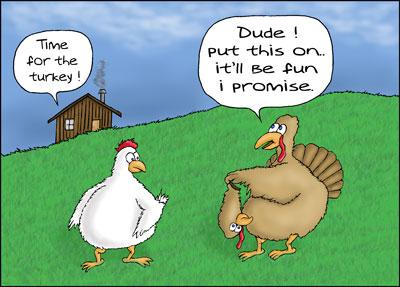 Tomorrow, of course, is turkey day — one of US peoples’ more obtuse holidays where actual thanksgiving gives way to stuffing the face with food.
And like most of the other so-called holidays, it’s authentic as a 3-dollar bill.

One — watch out for the shit in cans, and the increase of BPA, an endocrine disruptor that has been shown to interfere with reproductive development in animal studies.
BPA is found in the lining of canned foods, cash register receipts, dental fillings, some plastics and polycarbonate bottles marked with the number 7.
Via Raw Story: People who ate canned soup for five days straight saw their urinary levels of the chemical bisphenol A spike 1,200 percent compared to those who ate fresh soup, US researchers said on Tuesday.
And: â€œThe magnitude of the rise in urinary BPA we observed after just one serving of soup was unexpected and may be of concern among individuals who regularly consume foods from cans or drink several canned beverages daily,â€ said senior author Karin Michels. â€œIt may be advisable for manufacturers to consider eliminating BPA from can linings.â€
Watch that gravy.

And watch the conversation around the dinner table tomorrow — Politics may not be an easy topic for families with diverging viewpoints, but that doesn’t mean it’s off-limits, said etiquette expert Anna Post of the Emily Post Institute.
I wonder if Anna has ever had a discussion with a climate-change denier, OWS hating, right-wing crazy who does not understand, nor allow facts to get in the way of an opinion.

This is one lame post, that I agree.
When I started surfing the news sites online this morning, nothing seemed to jump out at me from all the bullshit replayed from all over this crazed planet and most of the stories are ones that’s been going on for weeks.
One — these GOP presidential debates are making me sick to the bowels and I continually wonder how those clowns even draw a crowd.
Last night was absolutely the same, except most-likely the most-odorous guy found on the public stage for decades, Newt Gingrich, was declared the “winner.”
Some shit from the MSM, in this case, CNN and Gloria Borger:

“You never know who’s going to show up: It could be the good Newt, smart Newt, full-of-ideas Newt, who I think we saw tonight. Or it could be the negative, nasty, anti-media stuff.
“And I think tonight we saw the first Newt Gingrich, the more positive Newt Gingrich who sort of had a vision and took on Ron Paul, and the Patriot Act debate.
“It was very, very interesting — the intellectual Newt — but he was appealing, which is something I don’t think he’s really been before.
I think it’s probably because he’s more relaxed, and he’s doing better in the polls and people like him.
I think he was more likable this evening.”

Gloria is one of those I wouldn’t want at my Thanksgiving table — Newt “likable?”

From live-blogging at The Economist: If Gingrich won, it’s because he’s such an unviable, nonthreatening candidate, the others didn’t feel the need to attack him. Once they do, it will kill him.
Newt is so full of shit, his eyes have got to be some kind of brown color.

Eat hearty tomorrow — food is food until its not.
Tim Lang, creator of the food miles concept and professor of food policy at London’s City University and president of British charity Garden Organic, argues our food system is essentially “broken” and failing to act will be catastrophic.
Indeed, ‘food miles‘ refers to the distance food is transported from the time of its production until it reaches the consumer, a good indicator of how foodstuffs are impacted by such things as climate change.
Via Australia’s The Sydney Morning Herald:

In the 1940s, mainstream thinking was captured by the view that applying science and technology such as chemicals, plant breeding and fertiliser to agriculture could solve the world’s hunger problem.
“This vision was a very optimistic, humanitarian use of science,” Lang says.
“It essentially triumphed in the 1940s and it’s what we are living with still.
We are living with the view that the problems of the world are caused by underproduction and that we have to raise production in order to increase consumption.”
Lang admits technology has brought about great improvements in public health but believes the old way has run its course.
“Seventy years on, we know that model, which the West has successfully spread around the world, may have been humanitarian but it was flawed,” he says.
“By the end of the 20th century it was already clear that it was running out of steam.
Look at the environmental problems, the growth of obesity and the gross inequalities in consumption.”
The sort of inequalities to which Lang refers are revealed starkly by the fact that an estimated 1.3 billion people worldwide are overweight or obese, while 800 million humans are believed to be underweight. Then there is the fact about a third of the grain the world grows is fed to livestock.
“Converting” grain into meat, milk and eggs on this scale is notoriously inefficient.
Or consider the estimated 31 per cent of total greenhouse gas emissions contributed by the European Union’s food-production sector.
“This is, frankly, cuckoo,” Lang says.
“It is a crazy system and we must not do what some agricultural scientists are asking to do — unleash new technology.
I’m not speaking against those technologies, I’m just saying, ‘Hold on, let’s have a proper debate.’
We must think about supply and consumption and distribution in the sense of social distribution.
“Our politicians have got to address the elephant in the room — an increasingly fat elephant called consumer choice — but no politician likes to do that because the consumer is their voter.
We have to take stock of this and have to realise that more production completely misses the point.
We have to address not just the ‘how’ question — how we farm and grow things — but also what we grow.”

The U.S. Dept. of Agriculture expects retail food prices to increase 3.5 percent to 4.5 percent this year, after climbing just 0.8 percent in 2010, and rising corn prices will take a big bite out of profits for turkey farmers.

The cost of traditional foods at a Thanksgiving dinner will jump 13 percent this year, the most in two decades, with a meal for 10 people estimated at $49.20, the American Farm Bureau Federation said on Nov. 10.
Turkey was the most expensive item on the menu and had the biggest gain, with a 16-pound bird up 22 percent at $21.57.

Eat up, the game’s coming on!