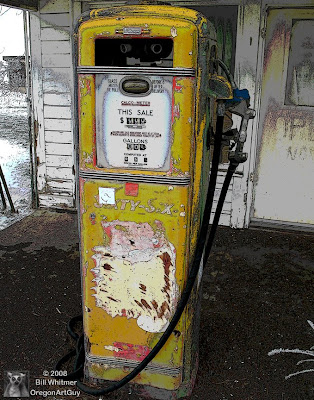 Yesterday after work, I put another $20 worth of gas in the old Jeep Comanche, now back up at $3.89 a gallon for regular — up three cents since the last time we visited the pump, less than a week ago.
And in line with the rest of the US, pump prices rose nearly 3.5 cents a gallon the last few days to a national average of $3.39 a gallon — in California a gallon now is $3.71, up 1.4 cents in a week.
The prices are nearly 30 cents higher than the same time last year.

A penny here, a penny there and soon you’ve have a pile of some real money.

The shit with Iran is the bad bet at the pump.
The International Monetary Fund warns the planet:

The International Monetary Fund warned on Wednesday that global crude prices could rise as much as 30 percent if Iran halts oil exports as a result of U.S. and European Union sanctions.
If Iran halts exports to countries without offsets from other sources it would likely trigger an “initial” oil price jump of 20 to 30 percent, or about $20 to $30 a barrel, the IMF said in its first public comment on a possible Iranian oil supply disruption.
The IMF highlighted the risks of rising tensions over Iran sanctions in a note on Wednesday sent to deputies from G20 countries who met in Mexico City last week.
The price impact caused by a cut in Iranian exports could be exacerbated by below average oil stocks in many countries, the result of tight oil market conditions through much of last year, the IMF said.

And in this the old ‘peak oil’ ugly raises its head.
Via the New York Times:

In an opinion piece (paywall) released on Wednesday by the journal Nature, James Murray of the University of Washington and David King of the University of Oxford point out that global oil production appeared to hit a cap of about 75 million barrels a day in 2005.
Since then, they note, small supply bumps have caused big price gyrations, yet even when prices spike above $100 a barrel, supply appears incapable of rising to meet the demand.
The professors make only a glancing mention of the term â€œpeak oil,â€ a widely promoted and widely attacked concept, but their argument resembles some of the less feverish versions of the peak oil case.
They essentially argue that oil supply now represents a large strategic risk to global economic growth, and that smart governments ought to be developing comprehensive plans and pushing hard to move their citizens into more efficient cars, onto public transit and so forth — a greener energy path that would also be good for the climate.

Even with all this mess at the gas pumps, there’s an underlying bullshit irony to it all.
Oil companies know the future is coming — via TreeHugger:

Utilities, the oil and gas industry, agricultural companies and insurers are building assumptions about rising temperatures and extreme weather events into their scenario planning.
This is what’s being called climate adaptation or climate preparedness.
The payoff from investing in adaptation could be substantial.
In 2011, insured losses in the U.S. from natural catastrophes, including tornadoes, floods and hurricanes, topped $105 billion, breaking the record of $101 billion set in 2005, the year of Hurricane Katrina, according to Munich Re, the world’s largest reinsurance firm.
Some of those losses had nothing to do with climate change, but others did.

Pump it down and dirty.