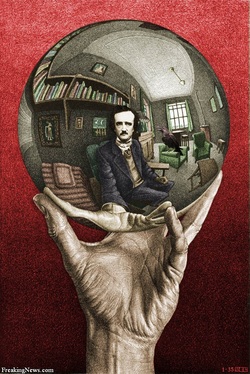 Evening into morning — and everything is still dark.

Some overriding health issues have caused me to have not a good night, thus, creating less-ability to compose coherent thoughts, and way-harder to transfer to blog lines (was about to write paper, but that’s so 1970s).
There’s plenty out yonder in the big, wide world to write about, but there’s a small imprint in the brain that wants to scream ‘Who Gives A Shit!’ except for those under barrage of that particular shit found in all corners of the globe.

Ugly unrest is on the peppered lips of today — the Occupy protests are getting not pretty, from the mess in Oakland, to a drive-in plunge in London, to more stun-gun episodes in Washington, DC.
People are only going to get even-more pissed.

One item did catch my blurred, Poed eyeball — in one of those Internet video “hangouts” yesterday on Google’s social network, Google+, also streamed live on YouTube, President Obama talked about a rare subject — the drone attacks in Afghanistan and Pakistan.
Via the BBC:

Asked about the use of drone strikes, which have increased in intensity during his presidency, he said “a lot of these strikes have been in the Fata”, or Pakistan’s Federally Administered Tribal Areas.
The strikes target “al-Qaeda suspects who are up in very tough terrain along the border between Afghanistan and Pakistan,” Mr Obama added.
“For us to be able to get them in another way would involve probably a lot more intrusive military action than the ones we’re already engaging in.”

A shitload of innocent people have been killed and wounded during these strikes, and folks in Pakistan are pretty-much getting pissed about the whole operation.
Obama, though, bypassed some important questions:

In a previous town hall-style event hosted by Facebook, the White House was criticised for ignoring one of most popular questions: Mr Obama’s stance on legalising marijuana.
He did not answer questions on drug policy in Monday’s event.

A Dream Within A Dream

Take this kiss upon the brow!
And, in parting from you now,
Thus much let me avow-
You are not wrong, who deem
That my days have been a dream;
Yet if hope has flown away
In a night, or in a day,
In a vision, or in none,
Is it therefore the less gone?
All that we see or seem
Is but a dream within a dream.

I stand amid the roar
Of a surf-tormented shore,
And I hold within my hand
Grains of the golden sand-
How few! yet how they creep
Through my fingers to the deep,
While I weep- while I weep!
O God! can I not grasp
Them with a tighter clasp?
O God! can I not save
One from the pitiless wave?
Is all that we see or seem
But a dream within a dream?