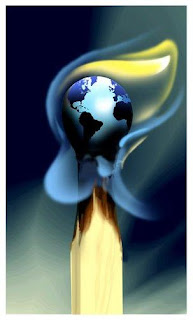 Any half-sane person is by now sick to the bowels of the GOP — Mitt Romney won the Florida primary, but the question posed: Who gives a shit?
Although President Obama is most-likely the most-disappointing leader in US history, he’s leagues above Romney and the rest of his half-assed, ignorant Republican buddies, as the above-mentioned half-sane person surely won’t pull the lever on any of these guys.
All thisÂ nasty, way-negative political bull-hockey overshadows the most-pressing concern — the weather.

Part of an e-mail yesterday from my youngest daughter, who lives in Minneapolis, Minnesota: Oh yeah, It’s like 50 degrees and sunny today. crazyness, right? I was sweating like crazy riding my bike to work this morning. Global warming man…
The kid’s got some sense — just talkin’ ’bout the weather.

This week, it’s likely that warm temperature records will be broken throughout the eastern U.S., with forecast highs in New York City approaching 60Â°F on Tuesday and Wednesday, and reaching the mid-60s in Washington, D.C. According to the National Weather Service (NWS), record highs may also be set today in Islip, N.Y., and Bridgeport, CT.
It has also been unusually warm in the mid-section of the country.
As Paul Douglas wrote for the Minneapolist Star-Tribune, the Twin Cities missed setting a record high by just four degrees on Monday, topping out at 44Â°F, about 20Â°F above average for the date.
Douglas wrote that there have been just three subzero nights so far this winter in Minneapolis-St. Paul, down from the average of 19 to date.
“It’s been one of the mildest winters on record; at the rate we’re going this will easily be a “Top 10 Warmest Winter” in the Twin Cities,” Douglas wrote.

And it’s only gonna get worse — Dr. Jeff Masters at Wunderblog: But it strains the bounds of credulity that all of the extreme weather events — some of them 1-in-1000-year type events — could have occurred without a signicant change to the base climate state. Mother Nature is now able to hit the ball out of the park more often, and with much more power, thanks to the extra energy global warming has put into the atmosphere.
No one seems to be much concerned, however.

Despite all the warming, the US MSM still doesn’t connect the dots, or put two-and-two together, or use any other glib phrase to describe how Americans are walking around in January bundled up in a Slayer t-shirt seemingly without a care in the boiling world.
These warm countrywide temperatures ain’t no flash in the pan.
Joe Romm at Climate Progress:

Our science-based institutions, like the National Center for Atmospheric Research, have no difficulty straightforwardly explaining the connection between human-caused global warming and these monster heatwaves.
If only our news-based institutions could do the same.
Now as Iâ€™ve said many times, every story about extreme weather does not need to mention global warming.
But if you are writing about a heatwave that is so uniquely extensive in space and time — just the kind of heat wave climate scientists have warned would become increasingly likely — and you are devoting an entire science article to explaining why itâ€™s been so warm, then, yes, it is incumbent on you to at least mention global warming.

And political irony from Craig Ferguson: â€œIt was so hot in Washington that Congress had to install a fan on the debt ceiling.â€

Beyond just talkin’ about the weather, we should be screaming, crying about it.