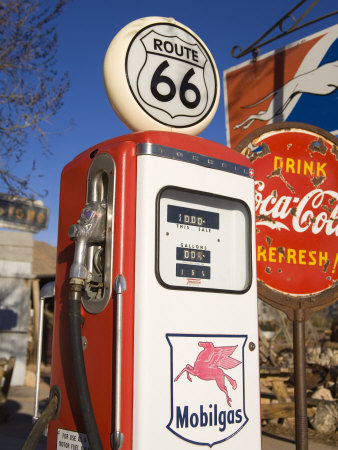 After a visit to the laundromat this morning, I put another $20 worth of gas in the old, problem-plagued Jeep, wincing (both the Jeep and I) at a pump price of $3.99 a gallon for regular — up more than a dime since the last time.

And apparently based on the so-called favorable employment report released Friday, U.S. sweet crude increased by $1.48 to end the week at $97.84 per barrel, while Brent picked up $2.51 to finish at $114.58 per barrel.
Gas-pump prices appear erratic, depending where ye be: Statewide average in California is $3.73 a gallon for regular, up 3.7 cents in a week, but meanwhile, a good friend of mine residing less than two hours south of me recently paid $4.19 a gallon — Sup with that?

Maybe we should take the plunge already and go Eurozone — $10-a-gallon gas would force stiff-necked US peoples to alter lifestyles and move on before the whole thing becomes reality.
New fuel for old vehicles — there’s about 240.5 million cars and light trucks cruising US highways and the average age of those vehicles rose to 10.8 years last year from 10.4 in the year before, due mainly to bad times in Detroit and the economy.
Apparently from indications beyond a recession, US peoples have been easing off the private vehicle for awhile now.
Via AlterNetÂ  two years ago:

Among the trends that are keeping sales well below the annual figure of 15-17 million that prevailed from 1994 through 2007 are market saturation, ongoing urbanization, economic uncertainty, oil insecurity, rising gasoline prices, frustration with traffic congestion, mounting concerns about climate change, and a declining interest in cars among young people.
Market saturation may be the dominant contributor to the peaking of the U.S. fleet.
The United States now has 246 million registered motor vehicles and 209 million licensed drivers — nearly 5 vehicles for every 4 drivers.

Perhaps the most fundamental social trend affecting the future of the automobile is the declining interest in cars among young people.
For those who grew up a half-century ago in a country that was still heavily rural, getting a driver’s license and a car or a pickup was a rite of passage.
Getting other teenagers into a car and driving around was a popular pastime.
In contrast, many of today’s young people living in a more urban society learn to live without cars.
They socialize on the Internet and on smart phones, not in cars.
Many do not even bother to get a driver’s license.
This helps explain why, despite the largest U.S. teenage population ever, the number of teenagers with licenses, which peaked at 12 million in 1978, is now under 10 million.
If this trend continues, the number of potential young car-buyers will continue to decline.

Plus these kids now are also faced with an incredible financial burden, not only with a humongous student-loan debt, but a bleak employment picture (despite Friday’s numbers) — unless one is an oil/gas person (corporations are people).

Maybe a bit of inequality right there: Exxonâ€™s $41.1 billion in 2011 profit translates into nearly $5 million in profit every hour, or more than $1,300 every second. The annual profit comes near the record revenues of $46.23 billion in 2008…Between 2008-2010, Exxon Mobil registered an average 17.6 percent federal effective corporate tax rate, while the average American paid a higher rate of 20.4 percent.

Maybe venture into the ugly-oddness of fuel:

Gasoline prices are higher at the beginning of 2012 than at the beginning of any previous year ever — even at the beginning of 2008, a year when the national average for a gallon of regular unleaded gasoline reached a record $4.114 on July 7.
In its Daily Fuel Gauge Report, AAA Texas noted Friday a national average of $3.467 for a gallon of regular unleaded gasoline — up from $3.455 a day ago, $3.389 a week ago, $3.288 a month ago and $3.116 a year ago.
“We’re seeing the highest gasoline prices that we’ve seen,” Sarah Schimmer of AAA Texas said Friday.
“2011 was a record year, and in 2012 we’re definitely seeing higher prices.”

And all this for mobility, not only just for driving my Jeep around town, but oil/gas framed within the way-big picture of how the existence of an entire civilization depends on the black, bubbly shit — no way yesteryear can continue into the nowadays.
In reality, peak oil is actually the end of easy oil, low prices at the pump and so forth, and this peak supposedly occurred worldwide in about 2005 — so we’re already on the downside.
One interesting look at future possibilities comes from “Fleeing Vesuvius: Overcoming the Risks of Economic and Environmental Collapse,” a collection of essays from economists, environmental scientists, a couple of architects and even a corporate lawyer on the premise of how close we are to being totally f*cked.
From a review by Stuart Jeanne Bramhall of Fleeing Vesuvius and posted Friday at DissidentVoice:

The title refers to the volcano that destroyed Pompeii in 79 AD, specifically the large number of residents who failed to save themselves, despite weeks of earthquakes, gaseous clouds and other obvious signs that an eruption was imminent.
For more than a decade, a growing body of evidence suggests that the planet is on the verge of economic and ecological collapse.
Yet the vast majority of us do absolutely nothing to prepare for the stark conditions ahead.
…
All (the essay writers) are in basic agreement around the bookâ€™s central premise: the industrialized world needs to urgently downsize its energy use, both to stave off catastrophic climate change and to conserve dwindling fossil fuels.
In his Introduction, â€œWhere We Went Wrong,â€ the late Irish economist Richard Douthwaite points out that one barrel of oil provides the equivalent labor of a man working forty hours a week for twelve years.
He goes on to stress that before the advent of cheap fossil fuels, capitalism was impossible — an economy relying on human labor and animal power is too inefficient to support it.
By definition capitalism depends on capital accumulation, the production of an economic surplus that can be reinvested in new capital (property and machines) to expand production even further.
Producing a surplus of this size only became possible because of the vast amount of cheap (practically free) work performed by fossil fuel energy.

And Ms Bramhall also reveals a brightness from the essays, not all doom-n-gloom: The last five sections of the book focus on solutions, with inspiring examples of new approaches to land use, agriculture and industrial design from individuals, groups and communities who have begun the transition to a less energy-intensive lifestyle.
Inspiration needs to have already been popped — too much pie-in-the-sky without actual political reality.
One updatedÂ  sample chapter of Fleeing Vesuvius can be found at The Oil Drum.
And another review of the essay collection can be found here.

A major snag in the optimism — the above-mentioned political reality.
So says Kumi Naidoo, head of the environmental group Greenpeace, who spoke Friday at the big-wig, pow-wow Munich Security Conference, and chimed a loud alarm.
Via Raw Story:

â€œThe moment of history we are in can be described as a boiling point or a perfect storm,â€ he told the assembled gathering of world leaders, ministers, top brass and defence policy experts at the annual Munich gathering.
â€œWe are seeing a convergence of multiple crises happening at the same time. A food crisis, climate crisis, poverty crisis â€¦ and then of course the financial crisis and a demographic crisis and a global governance democratic crisis,â€ he added.
â€œThe bottom line is that too many of our leaders â€¦ are sleepwalking us into a crisis of epic proportion,â€ he claimed.

One of those doing the sleepwalking is US Secretary of State Hillary Clinton, who’s also in Munich, Germany, this weekend for the conference, but her schedule has no room for end-of-life-as-we-know-it antics fostered by environmental activists — Clinton will most-likely reminisce about “…what a key partner Europe is in the global security, economic, democracy promotion agenda that we have.”