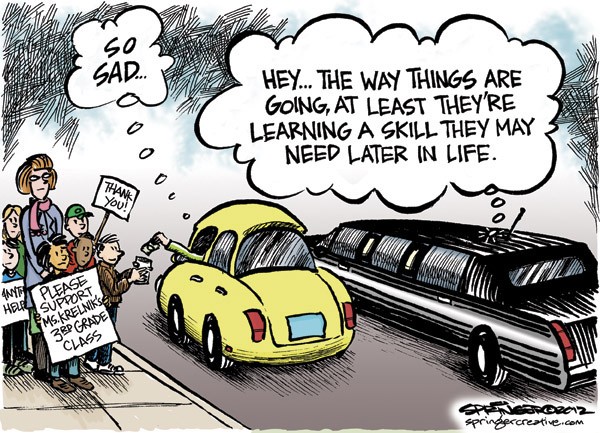 In the education dust-up via California state Sen. Leland Yee, D-San Francisco: “It is a little embarrassing that Harvard is cheaper than the California State University,” he said in an interview. “When you price out so many students, it is devastating to the future of the state. Our sons and daughters won’t be here to solve the state’s problems.”

And California is in a world of financial shit and carry a long, nasty laundry list of ugly items to be encountered this election year, with no real, feasible end.
The state carries what Gov. Jerry Brown estimates is a $9.2 billion deficit and although the former Moonbeam seeks to raise taxes on the wealthy, the entire budget process could go down the drain, sucking the educational side-show with it.
Cutting school funds has become the financial path:

The state has seen a whirlwind of cuts to public education that has forced schools and colleges to reduce their budgets.
Last month, the Long Beach Unified School District announced the layoffs of more than 300 employees as part of an effort to save $20 million.
The district has slashed more than $300 million from its budget since 2008.
Cal State Long Beach is also looking at significant changes this year.
The 23-campus Cal State University System was hit with one of the harshest cuts last year with a loss of $750 million in state funding.

This a state where a few years ago was considered the top of the educational line.

And this ain’t just us out here on the Left Coast.
FromÂ HuffPost and the long-running MetLife Survey of the American Teacher:

…teachers’ job satisfaction has decreased by 15 points since the survey assessed the issue in 2009.
Forty-four percent of teachers reported they were very satisfied, the lowest rate MetLife has seen in 20 years.
…
According to the survey, more teachers feel their jobs are not secure: That rate ballooned from 8 percent in 2006 to 34 percent in a post-recession world.
And over the last two years, the percentage of teachers who are considering leaving the field increased by 12 points, to 29 percent.
“The results are not at all surprising given the context within which teachers have been working for the last couple of years,” said Kevin Welner, a University of Colorado, Boulder education professor.
“Teacher bashing has been so undermining of the profession that it’s sapping the appeal out of the career choice.”
…
Thirty-nine percent of parents and 43 percent of teachers reported they were pessimistic that student achievement would improve over the next five years.
This finding stunned Bob Wise, a former West Virginia governor who now heads the Alliance for Excellent Education.
“If we donâ€™t have a teacher corps that’s ready to meet that challenge and feels inclined to … that becomes even harder to reach,” he said.

And politics, not necessarily finances, is the bad rub.
Paul Krugman in his column at the New York Times this morning cuts into the bat-shit crazy GOP.
Some snips:

But now one of our two major political parties has taken a hard right turn against education, or at least against education that working Americans can afford.
Remarkably, this new hostility to education is shared by the social conservative and economic conservative wings of the Republican coalition, now embodied in the persons of Rick Santorum and Mitt Romney.
And this comes at a time when American education is already in deep trouble.
About that hostility: Mr. Santorum made headlines by declaring that President Obama wants to expand college enrollment because colleges are â€œindoctrination millsâ€ that destroy religious faith.
But Mr. Romneyâ€™s response to a high school senior worried about college costs is arguably even more significant, because what he said points the way to actual policy choices that will further undermine American education.
Hereâ€™s what the candidate told the student: â€œDonâ€™t just go to one that has the highest price. Go to one that has a little lower price where you can get a good education. And, hopefully, youâ€™ll find that. And donâ€™t expect the government to forgive the debt that you take on.â€
…
Inflation-adjusted tuition at public four-year colleges has risen by more than 70 percent over the past decade.
So good luck on finding that college â€œthat has a little lower price.â€
…
After all, over the past 30 years, there has been a stunning disconnect between huge income gains at the top and the struggles of ordinary workers.
You can make the case that the self-interest of Americaâ€™s elite is best served by making sure that this disconnect continues, which means keeping taxes on high incomes low at all costs, never mind the consequences in terms of poor infrastructure and an undertrained work force.
And if underfunding public education leaves many children of the less affluent shut out from upward mobility, well, did you really believe that stuff about creating equality of opportunity?

Dude, no going Animal House now, and most-likely, maybe no house at all.