Doc: I don’t give a shit if he’s from Johannesburg.
I don’t want to hear dune koon or sand nigger from him or anybody.
Vig: Captain uses those terms.
Troy: The point is, Conrad, ‘towel head’ and ‘camel jockey’ are perfectly good substitutes.
— Three Kings 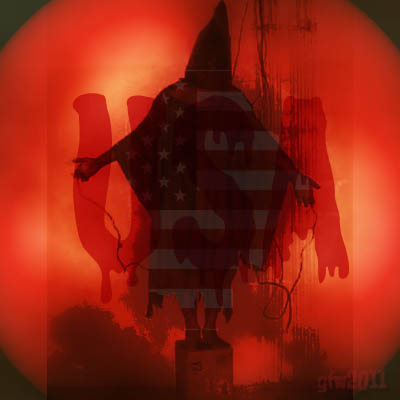 US Army Sgt. Bob Bales is to be charged today with 17 counts of murder in the rampage two weeks ago — an extra charge added which the military hasn’t yet explained — and his attorney thinks the entire legal business is a trial on America’s war machine: “I’m not putting the war on trial,” Browne has said, “but the war is on trial.”

Most irritating, most aggravating shit stink about all this is the real-guilty assholes who fertilized and procreated this horror will forever be scot free — George Jr. and his entire legion of liars and warmongers will live easy the rest of their days.

And they were/are being shit-ass sneaky.
From testimony of Chris Arendt, former US National Guardsman, taken at the Winter Soldier hearings in March 2008, and this snip:

And there is one other thing I wanted to address about issues in GuantÃ¡namo Bay.
Something that you can pay attention to in the media, something that you can pay attention to in how people talk about these things — when and if they do.
The usage of the term â€œdetaineeâ€, as we were told when we were deployed, had to be â€œdetaineeâ€.
It had to be â€œdetaineeâ€.
If itâ€™s â€œprisoner,â€ then they would have to be prisoners of war, and theyâ€™re subject to entirely different laws.
If theyâ€™re detainees, then they are subject to no law whatsoever, because there arenâ€™t laws for detainees.
Because they are called â€œdetaineesâ€ they donâ€™t get trials, there is no pending code for how theyâ€™re treated.
Itâ€™s semantics, and we need to pay attention.
They are important.
Itâ€™s the difference between calling something â€œa detention facilityâ€ and â€œa concentration campâ€.
Even if they are the same thing.

The MSM are assholes, too, don’t forget that — like a lot of other shit, the Winter Soldier event four years ago made hardly a blip on the US media radar and most US peoples have no idea it even occurred.
The whole run-up to the Iraqi war, even George Jr.’s proclamation within hours of Sept. 11, 2001, that US peoples should go shopping and leave the war-making to professionals, all should be put on public trial where the horror of the deeds, now manifest in slaughter after slaughter by people warped by a cruel, inhumane war machine, would become the real must-watch TV.
One example, this snip from embed reporter Neil Shea, and his take on the rank-and-file US GI in Afghanistan:

Up ahead, in the stream of black shapes, were the American soldiers I had come to fear.
They were men who enjoyed demolishing Afghan houses, men who shot dogs in the face.
The pair who had embraced like lovers, one tenderly drawing the blade of his knife along the pale, smooth skin of his friendâ€™s throat.
There was a guy whoâ€™d let the others tie his legs open and mock-rape him, and there were several men who had boasted of plans to murder their ex-wives and former girlfriends.
We paused in the darkness.
A line of Afghan soldiers shuffled past, also nearly blind without night-vision equipment.
They moved into position for the coming raid, clumsy as boxcars, trailing their own earthy stink.
I thought back to what an American Army sergeant had told me hours earlier.
â€œThis is where I come to do fucked-up things.â€
…
â€œYeah, we definitely made some Taliban out here,â€ he said.
â€œIt was like a week-long Taliban recruiting drive.
And we had fun doing it.
I love recruiting for the Taliban.
Itâ€™s called job security.â€

Read the whole story — sad, depressing and makes one get real-pissed at the powers that be that put those boys in the horror story they will live the rest of their days.

And to close, this from Robert C. Koehler at Common Dreams and another Winter Soldier story:

â€œI joined the Army on my 18th birthday.
When I joined I was told racism was gone from the military.
After 9/11, I (began hearing) towel head, camel jockey, sand nigger.
These came from up the chain of command.
The new word was hadji.
A hadji is someone who takes a pilgrimage to Mecca.
We took the best thing from Islam and made it the worst thing.â€
— Mike Prysner

And Bob Bales is just a freakin’ bad apple, a ‘rogue’ — my and everybody’s ass!