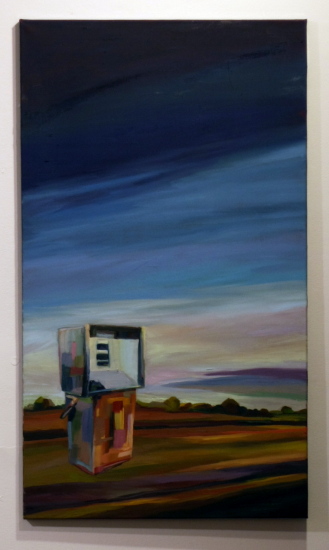 Weather tends to pop its now-ugly head into modern life on a much-more frequent schedule than just a few short years ago — yesterday afternoon tornadoes cleared a chaotic path through the Dallas-Fort Worth area, with video showing tractor-trailers being tossed around like toys.

CNN meteorologist Sean Morris estimated the tornadoes were EF1 or EF2 twisters, at their strongest.
“This is fairly weak in terms of tornadoes, but we saw the awesome power of the twisters as they lifted the trailers several hundred feet in the air,” he said.

And these kinds of scenarios will only get worse — why?
Fossil fuels — Duh!

Via Climate Progress from the Planet Under Pressure conference last week in London:

As consumption accelerates everywhere and world population rises, it is no longer sufficient to work towards a distant ideal of sustainable development.
Global sustainability must become a foundation of society.
It can and must be part of the bedrock of nation states and the fabric of societies.

And ‘consumption‘ of what?
Fossil fuels — Duh!

Even beyond the bubbling crude, coal is the real kicker — creating a third of all carbon dioxide emissions, producing nearly 40 percent of the worldâ€™s power.
According to WSJ’s Market Watch last week:

“China and India are leading the global buildout of coal-fueled generation.
Over the next five years, we see generation growing 370 gigawatts (GW)… and that requires more than 1.2 billion tonnes of additional coal.
To put this in perspective, this is equivalent to one new 500 megawatt power plant every three days… through 2016.”

And from the Union of Concerned Scientists: Waste created by a typical 500-megawatt coal plant includes more than 125,000 tons of ash and 193,000 tons of sludge from the smokestack scrubber each year. Nationally, more than 75% of this waste is disposed of in unlined, unmonitored onsite landfills and surface impoundments.
However, as much as we love coal, oil greases all of modern civilization.
Global consumption is about 87 million barrels a day (bbl/day) with the US and Europe sucking up about a third of that and in 2010, the globe was producing about 85 million bbl/day — what math?
From Spiegel Online and a ‘World without Oil:

But in most countries of the world, especially the emerging countries, economic growth and energy consumption still go hand in hand.
A global change of course is overdue, according to the German Advisory Council on Global Change.
“The carbon-based world economic model,” say the scientists on the council, constitutes “a normatively unsustainable situation” and is as morally reprehensible as slavery or child labor.

The Spiegel post was about peak oil, not climate change, but those two factors are hand-holding sweethearts.
And we all are locked into that love affair — yesterday, I put another $20 worth of fuel in the old Jeep with the cost still at $4.49 a gallon for regular.
Price hasn’t changed since the last time.

If we don’t get our collective heads out of our collective asses, this oil dream will soon be a nightmare where the weather has the last say, tossing every freakin’ thing around like toys.