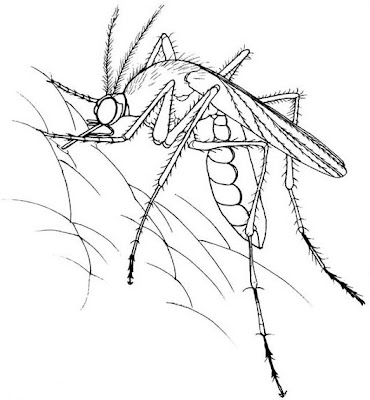 In this past winter of our heated content, all those warm, blissful days in February and March — TVed from Chicago, New York and all points east — them soothing temperatures also created an incubator for weird, and possibly some bad shit.

Dr Alison Donnelly of Trinity College Dublinâ€™s Centre for the EnvironmentÂ on the near-simplicity of near-abrupt climate change: â€œWe are seeing a very clear signal and seeing the effects in our back gardens,â€ she said. â€œPeople are saying they have to cut the grass all year long.â€
(Illustration found here).

In other words, all the warming indicates the tropics are shifting north — sorta like Margaritaville moving to Cleveland, but way-without benefits.
Dr. Donnelly from above also said this: â€œPhenology is the only real climate-change indicator that looks at how the change affects plant and animal life. It is also a really good way to convince policy makers about the reality of climate change.â€
Good fortune on that last one there, lady.

According to Wikipedia, phenology is the study of periodic plant and animal life cycle events and how these are influenced by seasonal and interannual variations in climate.
In other words, at the end of the line, how the weather effects living organisms, plant or animal.
Climate change, from what I’ve seen and gathered in just last four years or so, plays itself out in weather — locally, regionally, nationally, and continent, or even hemisphere.
Warm temperatures this year in the US Great Lakes area resulted in an early arrival of insects that trout love to eat — Richard Merritt, professor of entomology (the study of insects) at Michigan State University: â€œThe life cycle is based on heat over time,â€ Merritt said. â€œOnce they gather enough heat units in their bodies, theyâ€™ll move on to the next stage. If itâ€™s warm theyâ€™ll emerge.â€
Those insects, however, have been indigenous to that region for a lengthy while, but changes in the climate in the form of heat brings outsiders — one of those is the asshole mosquito, especially the Aedes aegypti, also known as the yellow-fever mosquito.

From the CDC on why this particular brand is bad news:

…because they have adaptations to the environment that make them highly resilient, or with the ability to rapidly bounce back to initial numbers after disturbances resulting from natural phenomena (e.g., droughts) or human interventions (e.g., control measures).
One such adaptation is the ability of the eggs to withstand desiccation (drying) and to survive without water for several months on the inner walls of containers.
For example, if we were to eliminate all larvae, pupae, and adult Ae. aegypti at once from a site, its population could recover two weeks later as a result of egg hatching following rainfall or the addition of water to containers harboring eggs.

Two years ago, Florida had its first outbreak of dengue fever (the poison carried by the mosquito) since 1934, and other cases have been reported at the Texas/Mexico border.
Although recent studies have shown a warming climate reduces infectiousness, the higher temperatures make for a wider range, so the result can be complicated, but not in a good way.
Links have been established between global warming and infectious disease — diarrhea, cholera, tick-borne illness, anthrax, cholera, along with West Nile virus, malaria and dengue (mosquito borne) — and the problem will only get worse.
Most US vibrio infections appear in the Southeast via oysters, and it used to be a summer problem, but thanks to a warming climate that window for infection is widening to nearly year round.
Erin Lipp of the University of Georgia: “It’s not just a summer disease. It’s becoming a spring and fall disease now.”

In an article at HuffPost last week on spreading infectious disease via climate change, especially tick-borne Lyme disease (reported cases have more than tripled since the mid-1990s), there was this on our little winged blood-sucker: Of increasing concern to the CDC is a mosquito recently arrived from overseas. The Asian tiger mosquito is particularly sensitive to climate and capable of transmitting not only West Nile, but also devastating diseases of the developing world, including dengue fever (already reported in Florida and Texas) and chikungunya.
“It’s only a matter of time,” says the CDC’s Beard (Ben Beard, a climate change expert). “We need to focus on what we can do about it now: surveillance, preparedness and prevention.”

And that’s what piqued my interest this morning on the asshole mosquito — what to do about it.
Which came from a post yesterday by Barry Ritholtz at The Big Picture, who asked readers for help in battling mosquitoes.
Ritholtz noted he would try just about anything to preempt these pesky varmints in my backyard, and is looking at two possible routes:

And readers responded, some ideas in the comments section included bug zappers, screened-in areas, propane-fired mosquito traps, hang a bat house, Brewerâ€™s yeast, cooking oil (for larval eradication), smoke (“They flee smoke. This even worked in VietNam”), lavender and lavender oil, geraniums and basil plants, garlic spray/fogger/granules, Irish Spring soap bars on posts, burning frankincense in an electric incense burner, and on and on…
One just said, “stay inside.”
However, a commentator commented: Mosquitos have been around since the mid dinosaur era. Good Luck.
About the size of it.

There’s way-more to climate change than just hot and cold and then hotter still.