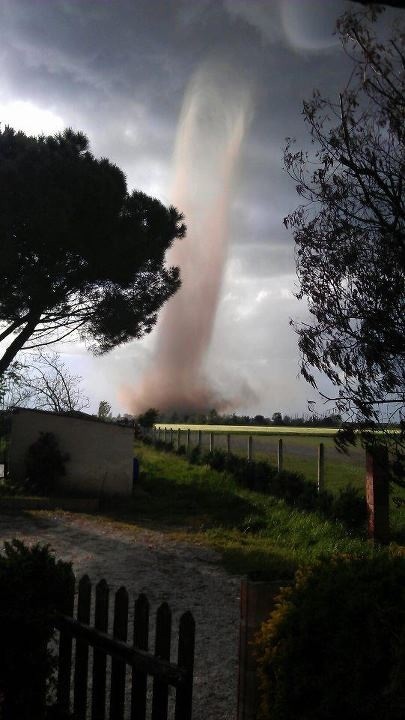 Moist weather here early this morning along California’s northern coast — a seemingly continuous drizzle which turns into a deep, wet fog and then back again.
Fairly normal, though, for this region, but it still gets old, and everyone appears jolted with a zest for life at each sliver of sunshine, which comes infrequently.

Rare last Sunday, however, was an EF-1 tornado with winds between 73 and 112 miles-per-hour punching across a portion of southern France, south of Toulouse, a near-unprecedented twister which collapsed walls, uprooted trees, and cars moved out of place.
The storm was accompanied by baseball-sized hail — France has about three tornadoes a year, comparedÂ  to the nearly 500Â  reported in the US since 2009.

Along with the twister, Europe felt the heat last weekend with records set all over — Moscow was at 84 degrees last Sunday, a new record since data collection began 130 years ago, authorities said.
The reason is a large low pressure system off the coast of France pumping hot air from the Sahara Desert northwards into Europe, which should be keeping things real-warm the remainder of the week.

In my humble observation, there’s never been an event so humongously-devastating as climate change in the history of the entire-whole world, and apparently the shit is getting worse.
Which might be a good thing.
US peoples are starting to take more notice — a poll a couple of weeks ago: When invited to agree or disagree with the statement, â€œglobal warming is affecting the weather in the United States,â€ 69 percent of respondents in the new poll said they agreed, while 30 percent disagreed.
And:

â€œMost people in the country are looking at everything thatâ€™s happened; it just seems to be one disaster after another after another,â€ said Anthony A. Leiserowitz of Yale University, one of the researchers who commissioned the new poll.
â€œPeople are starting to connect the dots.â€

Some people — others are criminally lying.
Nut-house Heartland Institute, a right-wing, bat-shit crazy bunch, unleashed a new bowel-movement aimed to further confuse the issue of global warming.
An excerpt via Care2.com:

The Heartland Institute is clearly attempting to sway people into thinking that those who accept that global warming is happening are marginal kooks: â€œThe point is that believing in global warming is not â€œmainstream,â€ smart, or sophisticated. â€¦ The people who still believe in man-made global warming are mostly on the radical fringe of society. This is why the most prominent advocates of global warming arenâ€™t scientists. They are murderers, tyrants, and madmen.â€

The assholes know they’re on the fringe, but these clowns will one day pay as their children and grandchildren will end up loathing their name — if there’s any grandchildren of anybody’s still alive.
Folks, climate change is real-bad shit.

Bill McKibben at tomdispatch calls climate change “the most important story of our time,” and time’s a-wasting:

This is a full-on fight between information and disinformation, between the urge to witness and the urge to cover-up.
The fossil-fuel industry has funded endless efforts to confuse people, to leave an impression that nothing much is going on.
But — as with the tobacco industry before them — the evidence has simply gotten too strong.
…
The one institution in our society that isnâ€™t likely to be much help in spreading the news is… the news.
Studies show our papers and TV channels paying ever less attention to our shifting climate.
In fact, in 2011 ABC, CBS, NBC, and Fox spent twice as much time discussing Donald Trump as global warming.
Donâ€™t expect representatives from Saturdayâ€™s Connect the Dots day to show up on Sundayâ€™s talk shows. Over the last three years, those inside-the-Beltway extravaganzas have devoted 98 minutes total to the planetâ€™s biggest challenge.
Last year, in fact, all the Sunday talk shows spent exactly nine minutes of Sunday talking time on climate change — and hereâ€™s a shock: all of it was given over to Republican politicians in the great denial sweepstakes.
…
If weâ€™re going to tell this story — and itâ€™s the most important story of our time — weâ€™re going to have to tell it ourselves.

People always ask me after we starting talking about the weird weather: Do you ‘believe‘ in global warming?
And as always, I tell ’em climate change ain’t no religion, it don’t depend on a belief system or any other mode/function in a dream-like state to know reality from delusion.
Real as a sharp pain in the guts.

The rub, however, is greed for economic growth.
From Grist yesterday:

Itâ€™s not about climate sensitivity or forcings or feedbacks; itâ€™s not about biophysical systems at all. Itâ€™s about what nations will do, what sort of treaties will be signed, what sort of policies will be implemented.
In other words, itâ€™s a question about politics.
Politics and power.
This is kind of obvious, but it often goes unremarked: Predictions about the impacts of climate change involve politics as much as physics.
Scenarios devised by the Intergovernmental Panel on Climate Change donâ€™t just involve different estimations of climate sensitivity, they involve different projections of the spread of renewable energy and efficiency, the development of carbon capture and sequestration (CCS), the rate of deforestation, and all sorts of other social, political, and technological trends.

Just one example — the crazed desire for energy to push the economics can be seen in the problems within the new-booming shale oil industry, where waste is flared-off into the environment, creating even more CO2 in the warming air: According to a World Bank official, gas flaring bumped up by 4.1 percent in 2011 â€” roughly totaling the gas demand from Denmark.

And we gotta put on the brakes, or else…
AÂ  new study from the University of Michigan reveals it’s the economy, stupid, but going the other way:

It is the first analysis to use measurable levels of atmospheric carbon dioxide to assess fluctuations in the gas, rather than estimates of CO2 emissions, which are less accurate.
“If ‘business as usual’ conditions continue, economic contractions the size of the Great Recession or even bigger will be needed to reduce atmospheric levels of COâ‚‚,” said Tapia Granados, who is a researcher at the U-M Institute for Social Research (ISR).
…
In years of above-trend world GDP, from 1958 to 2010, the researchers found greater increases in CO2 concentrations.
For each trillion in U.S. dollars that the world GDP deviates from trend, CO2 levels deviate from trend about half a part per million (ppm), they found.
Concentrations of CO2 are estimated to have been between 200-300 ppm during preindustrical times.
They are presently close to 400 ppm, and levels around 300 ppm are considered safe to keep a stable climate.
To break the economic habits contributing to a rise in atmospheric CO2 levels and global warming, Tapia Granados says that societies around the world would need to make enormous changes.
“Since the 1980s, scientists like James Hansen have been warning us about the effects global warming will have on the earth,” Tapia Granados said.

And this ain’t no ‘cry wolf‘ bullshit — it is the wolf.

One thought on “Climate A Go-Go”