In just a few days an obvious fracture in America’s supposed-rock of liberty: 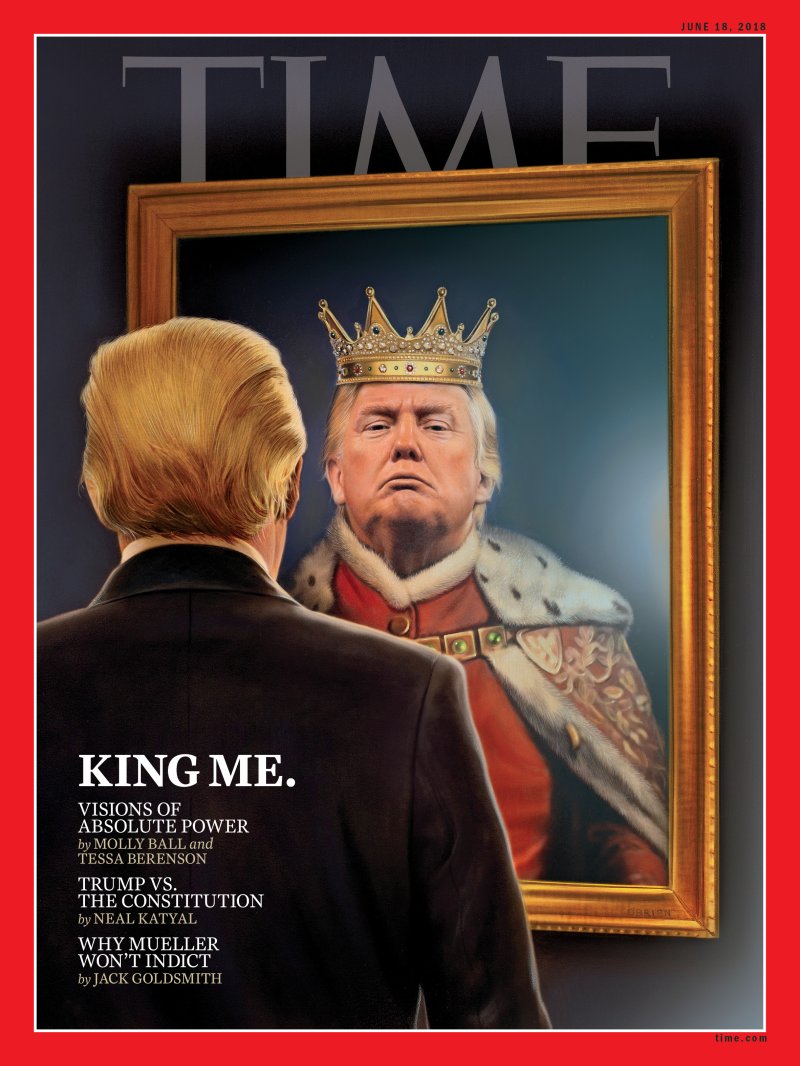 Brooklyn-based artist Tim O’Brien. who created the above image for a Time cover in June 2018: ‘“This portrait of Trump gazing into a mirror and seeing a king gets to the heart of how he and his legal team have approached this past week and the past 500 days, actually…Besides the usual challenge of the short deadline and making the image work, whether or not to have him looking at himself or looking at us was the thing I pondered most. His eye contact with each reader, each American fits the situation best.”‘

…..biggest test of his presidency emboldened, ready to claim exoneration, and take his case of grievance, persecution and resentment to the campaign trail.” Peter Baker @nytimes The Greatest Witch Hunt In American History!

Reaction to that shit was pretty-much of the legal-shock variety — one example from Law&Crime this morning:

“This may be the most sinister tweet Trump has ever posted,” University of Michigan law professor and former federal prosecutor Barbara McQuade wrote.
“He is comparing himself with a king and threatening to use his powers for revenge on those who questioned his abuse of power. This after AG Barr said Trump’s tweets make it hard for him to do his job. Any response Mr. AG?”

In order to withstand all this Constitutional-shattering shit from the T-Rump, Lucian K. Truscott IV at Salon this afternoon has the answer — good, old-fashion mass demonstrations:

I remember the last time the feeling of powerlessness was this strong.
It was back in 1969, with Richard Nixon in the White House.
On the day he took office, 34,000 young Americans had been killed in the war in Vietnam.
By that fall, another 9,000 had died.
It seemed as if everyone opposed that war, even those in the military being made to fight it.
Nixon was bombing North Vietnam, Cambodia and Laos.
The war had become a massive trench filled with blood and bodies.
Nothing anyone did could stop it.
The answer came on Oct. 15, 1969, with the Moratorium to End the War in Vietnam.
It was organized the old fashioned way, by word-of-mouth in bars and college dorms and offices and on the phone.
The result was millions marching in the United States and around the world, with a quarter of a million people marching on the White House in protest.
Two weeks later, Nixon gave his famous “silent majority” speech, widely seen as an answer to the Moratorium.
But two weeks after that, Seymour Hersh exposed the My Lai massacre, and three days later, on Nov. 15, another Moratorium March took place in Washington, with half a million marching against the war.
A quarter million marched in San Francisco.
Hundreds of thousands marched elsewhere.
Nixon was forced into the Paris Peace Accords.
By August 1973, the Congress passed the Case-Church Amendment, ending direct U.S. military involvement in the war.

We’re there again.
It’s time for another Moratorium march, this time against Donald Trump.
It’s not enough to vote against him in November.
We’re sliding into a fascist dictatorship.
The time to act is now.

People need to have a personal stake in this affair and the T-Rump in his arrogant, narcissist illusions could well provide them with one, and they need to get way-worked-up over the sonofabitch. A shitload of Americans still believe this whole thing is ‘politics,’ and not the way-serious fork-in-the-road moment for our country.

This ironic for the time (h/t Miss Cellania this morning):

And onward we go…