Sunshine is good, but we really need rain to survive. Although our Pacific Northwest neighbors experienced drenching rainfall already this year, California has been pretty-much dry, somehow the storms missing us.
Yesterday, the U.S. Drought Monitor reported almost 60-percent of the state was right now abnormally dry, an increase over the 46-percent recorded just last week.
Drought alarm bells are also sounding off on the declining snowpack in the Sierra Nevada Mountains. Snow in that area supplies water for about 30-percent of California. Accordingly, in January the snowpack stood at 90-percent of its historical average — now down to 53-percent of normal (Source EcoWatch). 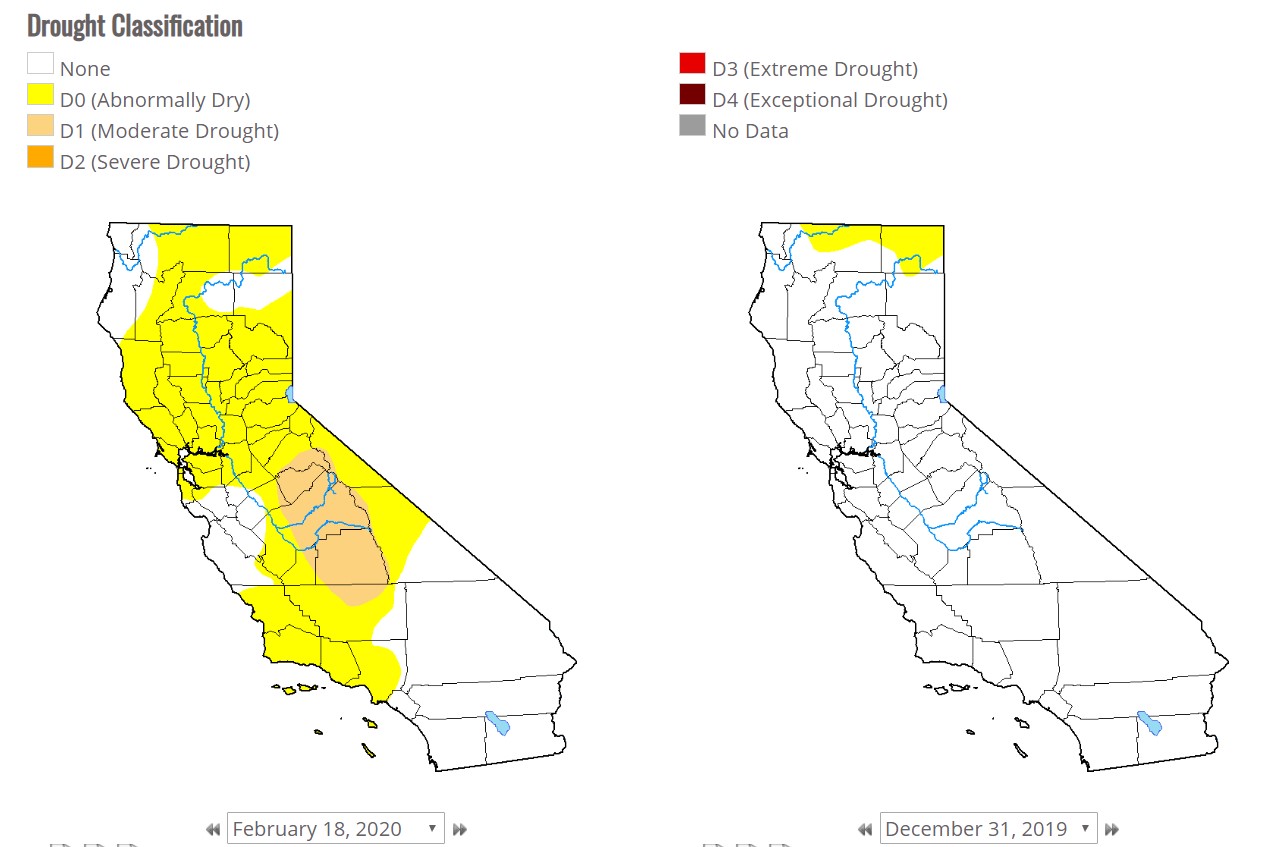 Supposedly, a tenacious line of high-pressure systems out over the Pacific kept the rain storms away from us, and in the last two months drought sensations have started to surface, not a good sign for comfortability, or just staying alive.
And apparently what little rain is expected next month might be too-little-too-late (Washington Post yesterday):

“There is some indication that in mid-March some moisture may come up from south,” said Alex Tardy, a warning coordination meteorologist for the National Weather Service’s San Diego forecast office.
“But the overall weather pattern of a blocking upper level ridge of high pressure will continue, which leaves us very small windows of opportunity for precipitation.”

So far, the state’s ski resorts are not in a panic mode as reportedly there’s enough snow around to keep skiers happy, and, ‘The dreaded “drought” word isn’t yet being tossed around.’
However, the dry-writing on the wall might forecast trouble — from the Guardian this morning:

“This hasn’t happened in 150 years or more,” said Daniel Swain, a climate scientist at UCLA’s Institute of the Environment and Sustainability.
“There have even been a couple wildfires — which is definitely not something you typically hear about in the middle of winter.”
Combined with warmer than average temperatures, the state is parched, and there is no moisture in the forecasts.
“The dryness has picked up as the season has gone on,” said Swain.
The year began with snowpack at 90-percent of its historical average. But less than two dry, warm months later, it’s hanging in at just 52-percent of average.
“Those numbers are going to continue to go down,” said Swain.
“I would guess that the 1 March number is going to be less than 50-percent.”
That snow isn’t just the basis for the mountain tourism industry in the winter — it serves as a significant source of water for California cities and agriculture come spring melt.
Last year’s snowpack at this time was more than 125-percent of average, an indicator of what Swain calls “precipitation whiplash”.
California has long weathered these wet and dry cycles.
The state’s future in the climate crisis looks warmer and drier not because of a lack of rain, but because of the extra heat drawing moisture out of the ecosystem.
That heat is a major contributor to reduced snowpack, both as less snow falls, and as more of it melts more quickly.
Climate science points to a California bound for a future that looks less like endless extreme drought alone.
“We aren’t going to necessarily see less rain, it’s just that that rain goes less far. That’s a future where the flood risk extends, with bigger wetter storms in a warming world,” said Swain.

Our situation here on the Pacific coast will have what weather folks call ‘climate whiplash‘ pretty-much into the immediate future, and beyond if nothing real-real humanity-ending shitty takes place — snapping from dry-drought conditions to way-wet, ‘wild swings from one weather extreme to another.’