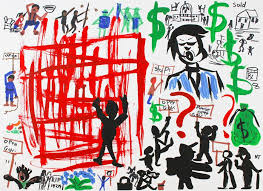 As if Americans didn’t currently have enough on their collective-disaster plate, now there’s the idiotic GQP-influenced debt ceiling bullshit, maybe leading to a US government shutdown at the end of this month, followed by a financial calamity for everybody but rich assholes.

The debt ceiling concept is dumb-ass to begin with, and the country has squeaked past its rectum several times in years past, but experts say this one might have an endgame scenario. I have to read, then re-read explanations on finance shit, but still can’t make sense of it.
In 2013 there was a debt-ceiling shitstorm, but the American public appreciated it: ‘A 2013 Gallup poll in 2013 found that one-fifth of Americans saw the federal budget as the nation’s top problem. In August, only 2 percent of Americans thought the same … But as the Gallup poll indicates, the data underpinning those assumptions is sketchy at best — raising the possibility that lawmakers are risking a catastrophic economic meltdown for meager political stakes.‘

Yet the snag-problem comes 100-percent from Republicans:

Senate Minority Leader Mitch McConnell says Democrats are playing a dangerous game by not raising the debt ceiling to avoid a default on the US’s bills, even though it’s one he started.

“My advice to this Democratic government, the president, the House and Senate: don’t play Russian roulette with our economy,” he said at a Wednesday press conference.
“Step up and raise the debt ceiling and cover all that you’ve been engaged in all year long.”

McConnell isn’t budging from his refusal to renew the nation’s ability to pay its bills, known as the debt ceiling.
He’s vowing Senate Republicans won’t lend the support needed to pass a measure aimed at averting a federal default, even as he says he doesn’t want the US to do so.
It may cause a financial meltdown and plunge the nation into another recession if Congress doesn’t act in time.

“If Mitch McConnell wants to say Democrats shouldn’t play Russian roulette with the economy, why is he the one that loaded the gun in the first place?” Zach Moller, economic policy director at the center-left Third Way think tank, told Insider.
“He’s the one that put the slug in the gun and stuck it on the table.”

MoscowMitch has already tightened the screws:

House Budget Chair John Yarmuth said Monday it could take “at least” two weeks for Democrats to lift the debt ceiling on their own.
But his position shifted on Wednesday and he told reporters that his staff concluded there’s not enough time to get it done.

“Parliamentary obstacles prevent us from altering this reconciliation bill or addressing debt ceiling through reconciliation,” Yarmuth said in a statement to Insider.
“The House passed legislation just last night to suspend the debt ceiling and keep the government open. The ball is now in Senator McConnell’s court.”

He went on: “If he doesn’t support this bill — or at least ensure it is not filibustered — our country will default and our government will shut down. The decision is now his.”

In shit games, MoscowMitch is the shits — a bad quick-note of the crisis from a piece at The New Republic today:

It’s worth dwelling on the risks involved. If Congress fails to raise the debt ceiling and the United States defaults on its credit, most experts agree that it would result in a globe-spanning economic downturn.
The U.S. economy, still in its frail post-Covid recovery, would plunge into recession. A report by Moody’s chief economist Mark Zandi found that six million people could lose their jobs in a crash that would wipe out as much as $15 trillion in household wealth — and this report may actually understate the risks.
The global economy, which depends on the stability of U.S. Treasury bonds, could crater, creating a situation at least as bad as the 2008 economic collapse.

This is, perhaps, the perfect moment for McConnell to run this debt ceiling gambit. He benefits from a media that struggles with the abstract concept of a debt ceiling, and from a Democratic Party that’s currently struggling to agree to enact its own agenda.
The most brilliant stroke may be that while McConnell is absolutely correct that Democrats don’t need GOP votes to avert the crisis, he knows that they’re struggling mightily with intraparty friction, and loading Democratic lawmakers down with an addition burden could magnify all the tensions that currently threaten to boil over.
According to Politico, polling offers McConnell an additional boost: The latest Politico/Morning Consult poll indicates that “more voters would blame Democrats than Republicans if the U.S. were to default on its debt.”

The media plays it near-straight that way — per an overview story this morning at The Washington Post and this real-reality snippet of the crisis:

“They have the House, the Senate and the presidency. It’s their obligation to govern,” McConnell told The Washington Post’s Mike DeBonis.
“You think I’m bluffing?” he said more recently, indicating that he doesn’t plan to be the one who swerves.

First, raising the debt ceiling has almost always been done on a bipartisan basis.

Second, raising the debt ceiling today pays for yesterday’s bills.
Specifically, spending authorized when Republicans were in power. The national debt grew exponentially during Donald Trump’s presidency, approaching World War II levels at 128-percent of the gross domestic product.
The national debt stands at about $28 trillion at this point, and it rose by about $7.8 trillion under Trump, The Post’s Jeff Stein reports.

And what should have been the lede — an understated understatement: ‘“This is about fulfilling the fiscal responsibilities that the U.S. has already occurred, and to say that they think Democrats should do that by themselves is a pretty remarkable move,” said Molly Reynolds, a budget analyst at the Brookings Institution.‘

Shitty-asshole gesture in reality to ‘a pretty remarkable move.’

And again, here we are…