Even as the T-Rump makes open admissions of overturning the last election, and as democracy dangles in the balance, the House Select Committee investigating the Jan. 6 insurrection/riot — “…the mother of all investigations and a quantum leap for Congress…” — is actually plowing the legal field:

“It’s not a criminal investigation, but having experienced former prosecutors who know how to run complex, white-collar investigations working on a plot to overturn the presidential election is a very useful talent among your team,” said Representative Adam B. Schiff, Democrat of California and a committee member.

Yet the problem remains of human morals. 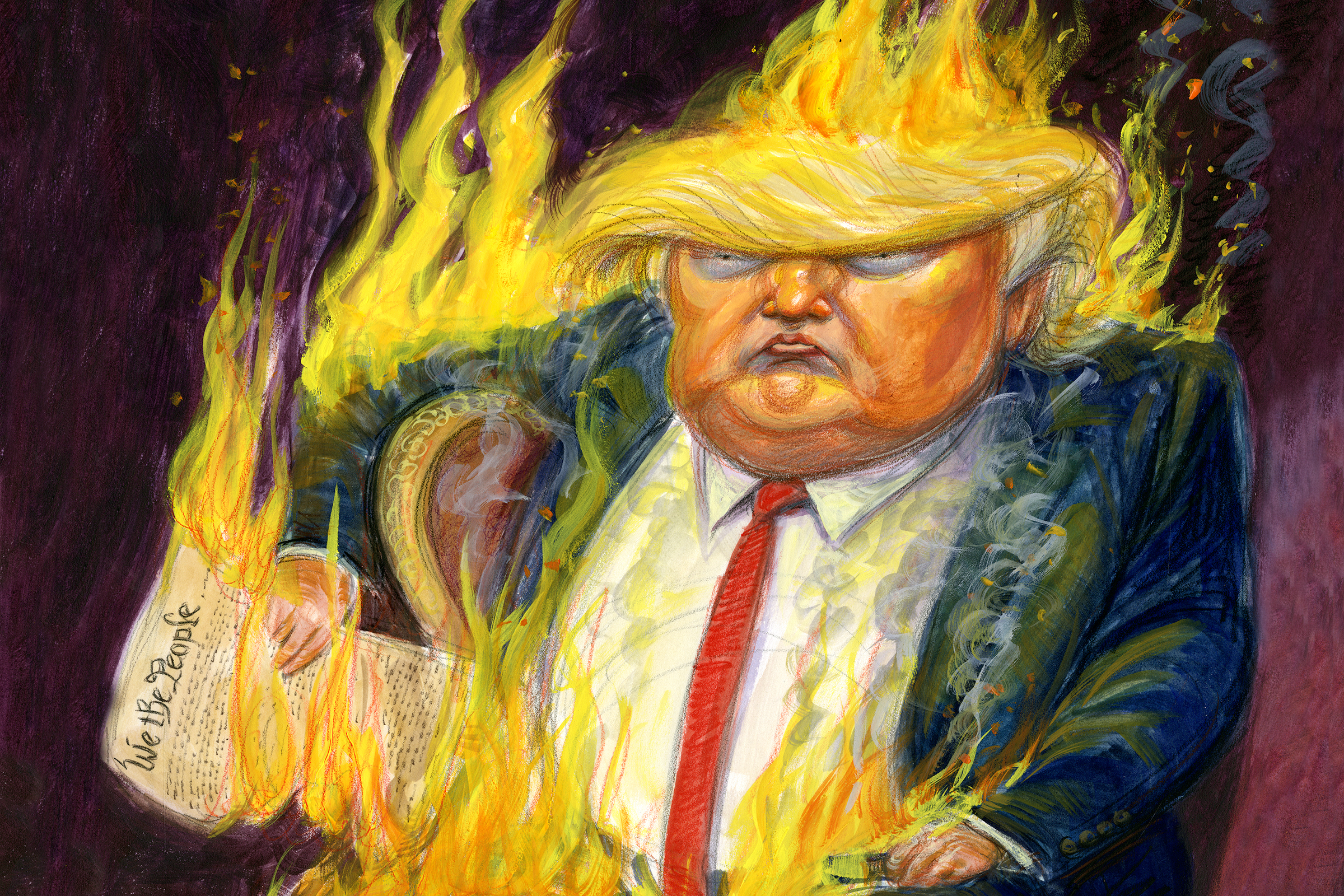 One of the not-discussed much aspects of T-Rump’s insurrection/coup attempt in the last month or so of his presidency — not excluding Jan. 6 — is how certain people developed a democratic spine (like Mike Pence yesterday, though, way-way-ass late) as the different plots played out in T-Rump’s White House  — Mona Charen at The Bulwark last week explored the known points and the resistance:

Trump, we now know, paged through the federal departments and agencies looking for willing insurrectionists.
He explored the possibility of having the Justice Department seize voting machines in swing states (Bill Barr shot down the idea), and then considered installing Jeffrey Clark as attorney general in Barr’s place (a threatened mass resignation stayed his hand).
He then turned to the military and considered using his emergency powers under the International Emergency Economic Powers Act to permit the Pentagon to seize voting machines and other records. Things had gone as far as the drafting of a presidential “finding” about nonexistent fraud.
Trump also tested the waters at the Department of Homeland Security, asking Rudy Giuliani to see whether the (unlawfully appointed) acting deputy secretary, Ken Cuccinelli, would seize the voting machines under that department’s auspices.
Cuccinelli begged off.
…
A little-noticed feature of the stories about Trump’s thus-far unsuccessful efforts to stage a coup is that even among the MAGA crowd, some things were considered beyond the pale.
Barr was willing to swallow a lot, but he couldn’t go along with lying about imaginary vote fraud. The high-ranking lawyers at the Justice Department were Trump appointees, but they would resign en masse rather than see Clark subvert the department for plainly unlawful ends.
Brad Raffensperger voted for Trump but refused to lie for him. Cuccinelli was Trump’s loyal immigration hawk, but he couldn’t see his way to using his Homeland Security post to confiscate voting machines and commit fraud.
And though Mike Pence, pressed hard by Trump for the last full measure of devotion, wavered (he phoned Dan Quayle for advice), in the end, he did what he knew was right.

A healthy body politic, like a healthy physical body, needs antibodies. It needs certain automatic defenses. The actions of those Republicans were the vestigial antibodies of a healthy democracy.
The people who made those crucial decisions were acting out of a sense that anything less would be dishonorable and would be perceived as such by the whole society.

Apparently, that’s the weight put on the “slow-motion coup” theory that made the rounds late last year, which seemingly has continued unabated by asshole T-Rumpists and/or just criminal thugs in Congress and state legislatures nationwide. Apparently, the plan in 2024 will be the same as in forever:

This must be said again: Donald Trump is not just another typical politician. He is a malignant narcissist whose worst intentions are to destroy anything and anyone that threatens to deprive him of power, wealth and reverence. He will not stop until he is stopped by others because he has no conscience or moral compass.
He is beyond political or personal salvation — he is deceitful, conniving, corrupt and dangerous, without any regard for others. He has no business being the leader of a country; to him, public service is an anarchic playground for his personal gratification. His malicious intentions cannot be overestimated.

In a telling example, Jason Linkins at The New Republic today concludes with the most-realistic future insurrectionist threat:

All of which goes to show that no matter how exposed Trump’s band of miscreants might be, the former president is still adding powerful allies to his corrupt cause. And the next coup, if it comes, will look very different from the last one.
It won’t be a ragtag mob trying to sack the Capitol or flailing efforts to enlist the Department of Homeland Security to swipe voting machines off the streets. Strong protections were already in place before Trump took those desperate measures.
Rather, the next plot against the Republic would be much more subtle, painted with a sheen of lawfulness and mounted against more vulnerable spots, where democracy is held together only by long-standing norms and gentlemen’s agreements.
But what happens when those gentlemen are replaced by rogues?

A who’s who of insurrection/coup, white-collar edition:

Shit-dog! Yet once again, here we are…