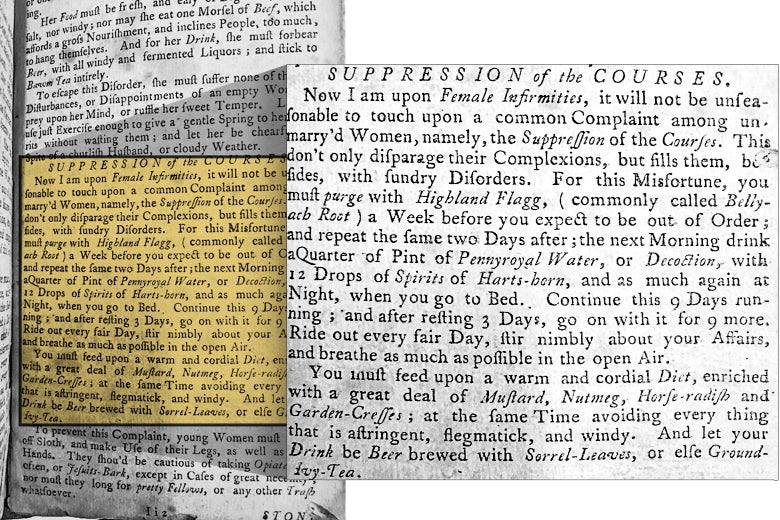 (Illustration: From ‘The American Instructor.’ via American Antiquarian Society, and found here).

In the shadow of this week’s SCOTUS bomb, the American scene has been in some kind of turmoil — hardcase cruelty exposing Republicans as living/breeding a hypocritical lie that could drown us all.
Yet history has already set the precedent.

Molly Farrell at Slate yesterday reported that founding father Ben Franklin not only ventured a recipe for abortion but was just one of many who supplied advice to the ‘unmarry’d Women‘ in those days on how to terminate a pregnancy. Franklin updated a British book, “The Instructor” — which covered arithmetic to letter-writing to caring for horses’ hooves — for the American colonies in 1748 as “The American Instructor,” adding the herbal instructions for how to do an at-home abortion.
Go read the whole piece — I’ve never heard about this before, as history shoots down the asshole Republicanss’ balloons filled with hate and whining vapors.
Farrell did conclude with this:

As an early American literary critic who works on the history of numeracy, I thought of Franklin’s book multiple times while I read the news this past week. Florida legislators want to excise social and emotional learning exercises from math textbooks for children, as though presenting arithmetic without context has ever been helpful or even the norm. And now, should some version of this draft Supreme Court opinion hold, the ruling on Dobbs v. Jackson Women’s Health will render abortion effectively illegal for myself, my students, and my daughters here in central Ohio, where new Intel factories are about to require tens of thousands of workers with advanced quantitative skills. For many of us, abortion access is an essential part of STEM education. It keeps us in school; it keeps the kids we already have fed and housed while they’re in school. And it is simply health care—like treatment for the umpteen other maladies listed in the colonial medical handbook.

Alito’s draft argues that “Roe and Casey must be overruled,” pointing out that “the Constitution makes no reference to abortion.” Maybe so, but for the Framers’ contemporaries who learned to count with Franklin’s help, safe and accessible abortion was a matter of simple math.

Learn something nifty every day — Not!

However, once again here we are…