Quiet on a Monday evening.

Except in the crazy corner of the country — inhabitants of the reality asylum:

All this horrible shit just might be a really good spin for Democrats as the mass of Americans has rejected Republican/MAGA bullshit the last three elections. And if GOPer-assholes keep it up, it will not only bring disaster for them at the ballot box but maybe be a helpful-unify bind to the left-siders.
A note on this by David A Hopkins, associate professor of political science at Boston College and author of “Red Fighting Blue: How Geography and Electoral Rules Polarize American Politics,” in a piece at The Washington Post this afternoon:

This month’s extended fight over the House speakership confirms once again that America’s two major parties don’t operate as mirror images of each other. While Republicans engaged in a dramatic intramural battle — complete with threats, name-calling, and even an attempted physical confrontation — Democrats behaved with relative serenity, electing their leaders by acclamation.

The Democrats’ comparatively harmonious state is often ascribed to the talent of leaders such as President Joe Biden and former House Speaker Nancy Pelosi, who are adept at cutting deals and enforcing discipline. But most of the credit for making the Democrats a more unified party belongs to the voters.

The Democratic Party has long been organized as a “big tent” coalition of multiple jostling subgroups. But the most important divisions among its federal officeholders have historically occurred along a single fault line: On one side are moderates and conservatives elected from right-of-center Southern or rural constituencies; on the other are more liberal party regulars representing the left-leaning urban North and West. 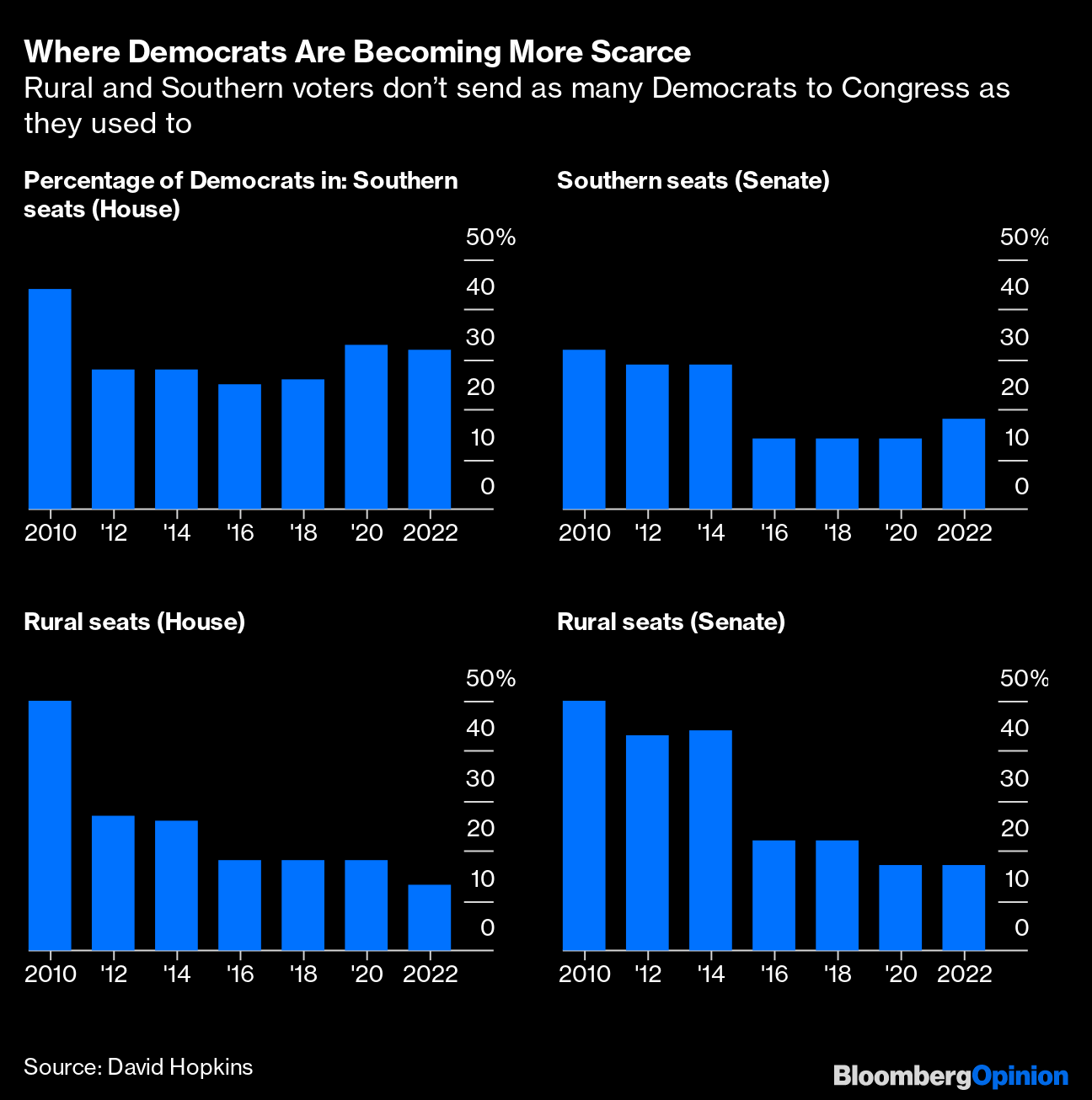 When Democratic leaders have faced trouble enacting the policy agenda endorsed by the national party platform, opposition from the southern/rural wing has usually been the main impediment. These chronic dissenters turned against much of the New Deal in the late 1930s, blocked major civil-rights legislation until the mid-1960s, and defected to provide pivotal support for Ronald Reagan’s tax and defense policies in the early 1980s. More recently, they helped to kill Bill Clinton’s health-care plan in 1994 and temporarily imperiled Barack Obama’s more modest reform proposal 16 years later.

But the old-line Southern and rural Democrats are disappearing from office, replaced in most cases by Republican successors. By the most recent session of Congress, Democrats held just 32 percent of all Southern seats in the House (many of them majority-minority enclaves with mostly liberal electorates) and 18 percent in the Senate.

In a large, diverse country governed by just two major parties, unity will always be a relative term. Factions will continue to jockey for power, and the policy differences between the likes of Representative Alexandria Ocasio-Cortez and Senator Joe Manchin will remain significant (though not always unbridgeable). But for all of the personal skill displayed by Biden, Pelosi and Senate Majority Leader Chuck Schumer in shepherding legislation through the last Congress, their task was made much easier by the larger geographic and electoral trends that have made their party much more ideologically coherent.

Of course, big problems with Democrats in this situation is, one, they’re not crazy, and two, they’re generally not gun crazy-nuts. The onslaught of hard-right asshole twits (Marjorie Taylor Greene/Lauren Boebert, hello!) will maybe shake up the voters and cause a meltdown next year.
We can hope.

Last month, this was a chalkboard-description effort:

Despite the facts, here we are once again…

(Image out front by illustrator and portrait painter, Tim O’Brien, and can be found here.)