What’s this with US bombs and Afghan weddings? 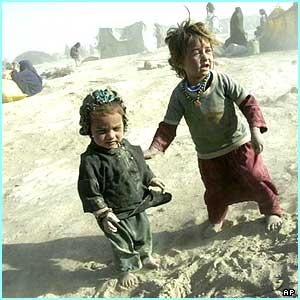 These two kids, small members of an Afghan wedding party bombed to bits by US aircraft in July 2002, killing 20 to 30 people (Illustration found here), are a horrifyingly sad picture of what’s been accomplished in a war that’s now dragged on for more than seven years.
And in that 2002 wedding crash, US officials refused to apologize for the incident, claiming the aircraft had been fired upon.

And that damned bullshit continues.
Just this past Monday another wedding bombed, the bride killed along with at least 40 others.
From antiwar.com:

Wedding get-togethers in Afghanistan, and even Iraq, can be way-dangerous to attendees.
The always informative tomdispatch presented an overview last July on the US habit of blasting apart the nuptials.

One hopes President Obama will halt the slaughter.