Intelligence does not always mean brainy.

Charlie Wilson wasn’t a spook, but he used the stuff of spooks to create such an explosive blowback situation in Afghanistan that the war he fueled altered modern life — and not at all for the good.
Wilson is a Custer-like asshole who convinced all of DC the CIA could beat the Russkies using local folks — the mujahedeen — and of course, the rest is 9/11 history.

President-Elect Obama’s selection for CIA director of Leon Panetta, who’s been doing something or another in DC since 1966, has caused a hissy-fit — Dianne Feinstein and John Rockefeller got miffed and a shitload of so-called “intelligence experts” claimed Bill Clinton’s former chief of staff has no ‘Intell’ experience, but nobody seems to notice the obvious — the US spy agency apparently does such shitty/slip-shod work, any serious insights out of McLean, VA can’t be trusted.
Nothing says it better:

So wrote Chalmers Johnson in The Nation, Oct. 15, 2001.
And in the CIA-operated “Charlie Wilson’s War” and its subsequent terrorist/insurgent blowback, it was all on the hush-n-hush, everybody a culprit except for the US public.

Pulling for Afghan insurgents/warlords?
Wilson is full of shit — It was besting the Soviets, and when the Russkies rumbled across Friendship Bridge, the US did the same, disappearing, leaving behind not only a pile of trouble, but a shitload of weapons, a vortex of a vacuum, from which sprang forth al-Qaeda.
And in a seemingly apparent attempt to reverse/and-or revitalize this so-called ‘intelligence agency,’ Obama has apparently picked a guy who can manage money, at least on paper, and maybe can help manage a company infested with a mantra for black operations and subversion.

And this, the US top spy agency with some nasty “family jewels” once stored in a locked vault. 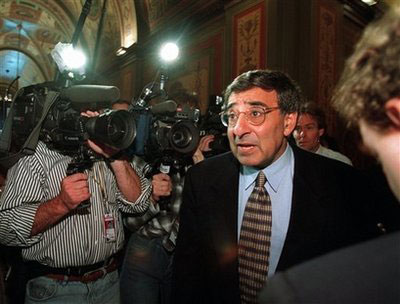 Enter stage left, Leon Panetta, supposedly set to take over an agency riddled with problems, and drag the US away from the horror of torture, rendition and all the other immoral/illegal stagecraft allowed by Decider George’s tenure at the helm.

If nothing else, Panetta appears as one to remove the global veil of the US being inhumane.

In a short piece early last year at Washington Monthly, he pared it down to the bottom line: Fear.

One of the dream-like aspects of the last eight years has been the visual ugliness of indeed the Ugly American, creating a shitstorm in just about every corner of the planet.
The CIA’s latest venture: drugging Afghan warlords with sex-inducer viagra.
In a post last month at Politicol News:

Leon has a rough row to hoe.