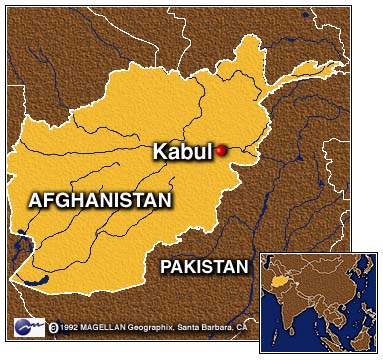 Wednesday’s seemingly-fearless, intricate attacks in Kabul by a way-over-resurgent Taliban should be very much a sign-post of an eye-opener on the bad road ahead in Afghanistan.

Apparently, a near-identical Mumbai operation with its seemingly random assaults and a kind of scatter-brained detail to its movements — The old, time-tested “shooting as they went” scenario.
Fifty-six mostly bystander/civilians were killed.
(Illustration found here).

These Taliban guys are putting a choke hold on the situation — timing is always crucial, but even more so in any precarious situation, which is now Afghanistan, and the US might be running out of time.
President Obama is reportedly set to increase the US troop level to about 60,000, but the bulk of the main force won’t be deployed until after a strategic review in time for a NATO summit in April.
He still dragging his feet — surge or no surge or surge, surge.
Bill Gates said Tuesday Obama has several options in front of him and most likely will make a decision in the “next few days” about how to handle this horribly deteriorating affair.
Dennis Blair, director of National Intelligence, told the US Senate Intelligence Committee today that despite all that could be done (and was done for more than seven years), the Taliban and like-groups have “expanded in scope” and the real problem is with the Pakistani border — However, that’s a whole another glob of worms intertwined in the same bubbling bucket of worms.

And this shit don’t help.
From Agence France-Presse:

Those attacks were timed for Dick Holbrooke’s appearance in Kabul, a timely reminder from the Taliban on the Afghan twist for the fate of foreigners — an insurgency that will over time whittle an army into unmanageable shreds.
When irrational behavior becomes too sophisticated to grasp, what happens next?
New tactics introduced, hard to find any security:

And a detailed view:

Twenty years ago this Sunday — Feb. 15, 1989 — General Boris Gromov walked across Friendship Bridge out of Afghanistan and into what was then Soviet Uzbekistan, bringing to an inglorious end to not only a terrible military blunder, but the USSR itself.
Gromov reiterated an old axiom for Afghanistan at a recent Moscow news conference: He said force will accomplish nothing in Afghanistan, and notes that increasing or decreasing troop strength will only bring a negative result. The general says the best way to deal with Afghans is to reach an agreement with them.
Any other path seems to lead to disaster.

And in the shadows, a blending of Taliban and al-Qaeda, creating another backpedal across Friendship Bridge — the real, real giant of an underlying problem in the Afghan/Pakistan war zone:

What the shit happened?
And what’s Obama to do?
Fight a shadow in a land of shadows with time fleeting away?