“Why ain’t they turning?” — Frederick Fleet, in the crows nest of the Titanic. 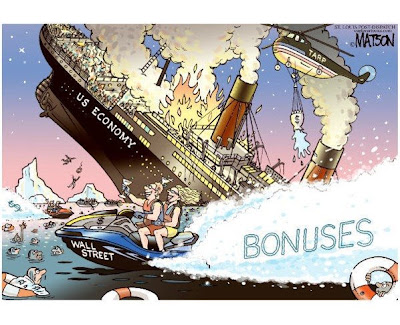 As President Obama prepares for a major speech tonight to a joint session of Congress — a State of the Financial Union, if you will — on the mysterious horror of our economy, he might pull a spin of Wild Bill Clinton’s 1992 campaign workhorse slogan that knocked Bush I out of the White House.
This time, however, Obama needs to tell US peoples the truth — the stupid economy is totally fucked and nobody knows how to fix it.

Although Obama is reportedly ready to render a “sober assessment” of the disastrous US economy, he might follow Clinton’s recent remarks that instead of negative talk, he should lighten up a little: “I just want the American people to know that he’s confident that we are gonna get out of this and he feels good about the long run.”

At least, Mr. Obama, point out the iceberg!