Last graph inÂ Al-Jazeera‘s report on Tuesday’s shooting in south Alabama: “The right to own guns has been fiercely defended in the US since the country’s civil war in the 19th century, and they are widely available for purchase for reasons of self-defence and hunting.” 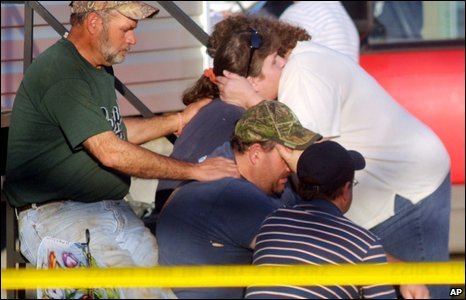 Samson, Ala., Mayor Clay King on the aftermath: “…never, never dreamed of this happening…”

The gunman, Michael McLendon, was reportedly armed with at least two assault rifles, one an AK-47, and a 38-caliber pistol.
He also shot and killed four dogs at his mother’s house.
And then continued onward, apparently killing random folks along the way — one at a Samson hardware store, another at a nearby gas station, two people on their porches — creating a real-life shooting/police-car chase across a small patch of south Alabama, finally ending up at a metal fabricator warehouse about 15 miles away, where after popping off about 30 rounds at police, shot and killed himself.

And Mayor King this morning on CNN: “Well, the whole community is still in shock. Like I said, we know, I personally know everyone that is involved, both the shooter and the victims. And that makes it more difficult to have to deal with.”

A most tragic and bizarre episode.
And a personal one, in an ancestral way.
I was born in Brundidge, Ala., about 35-40 miles northeast of Samson, and most of my still-living relatives still reside in what’s called the “wire-grass” section of southeast Alabama, tiny towns with names like Elba, New Brockton, Ozark, and the big city in the area, Dothan (from the Bible).
And although I actually grew up on the Florida panhandle — a small town on Choctawhatchee Bay named Shalimar — during so, so many visits to my relatives back in Alabama, the journey carried our family car right down West Main Street of Samson to a left turn on State Road 87 and north towards Ariton.
I haven’t been back to Alabama in more than 20 years, and certainly haven’t been down West Main Street in Samson in probably 40 — the town seemed caught in the 1940s, as I recollect, even when I passed through it in the 1960s, with old cars, old people and a lot of old, big southern homes with all the big porches and screens.
In fact, on a lot of those trips we stopped in Samson, to get soft drinks or whatnot, and a few times for me to get a haircut — after all these years I can’t recall why a freakin’ haircut was needed so badly, the clipping was done there.

Everyone is from somewhere.
Alabama for me is just where I’m from — I tell people, please, don’t hold that against me.

Now the people of Samson, where in reality everybody-knows-everybody, have to deal with an incident seemingly right out of Stephen King.
And add to the strange, this morning in Germany:

In this case, too, the gunman carried on a shooting/police-car chase, ending up near a car dealership (where two bystanders were killed), and shot by police.

Also this morning in Las Vegas:

And another hospital shooting this morning, this one in Spain:

And last weekend in of all places, the southern Caribbean:

While Googling “shootings,” I came up with another weird rampage from last month, this one near another long-time-ago childhood stomping ground in Florida, the resort town of Miramar Beach, just east of Destin — about 60-70 miles east of Pensacola on the Gulf coast.

As John Lennon pointed out: “Happiness Is A Warm Gun.”
Indeed.