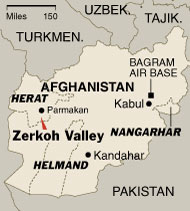 But he says he never encountered an enemy as tenacious as what he saw immediately after arriving at this outpost in Helmand Province in Afghanistan.
In his first days here in late June, he fought through three ambushes, each lasting as long as the most sustained fight he saw in Anbar.
…
The bombs found so far have been largely homemade with fertilizer, though they have still killed more than 20 British soldiers and United States Marines to the north and south of Nawa.
â€œIf they had better weapons, weâ€™d be in real trouble,â€ said Lance Cpl. Vazgen Matevosyan.

The upticking war in Afghnistan lies in the vast, ugly shadow of Iraq.

Iraq wasÂ on top of the list from the get-go — going after Saddam was topic “A” 10 days after the inauguration — eight months before Sept. 11. â€œFrom the very first instance, it was about Iraq. It was about what we can do to change this regime…Day one, these things were laid and sealed.â€

In December 2001, even as the incursion into Afghanistan was just winding down and Osama and his boys were reportedly pinned down in the Tora Bora Mountains,Â George Jr. was meeting repeatedly with Army Gen. Tommy R. Franks and his war cabinet to plan the U.S. attack on Iraq.
This hyper-active bunch’s biggest concernÂ was fueled by the CIA’s conclusion that Saddam couldn’t be knocked-out-of-the-box except through some kick-ass “shock and awe.”
And, of course, George Tenet’s now infamous “slam dunk” claim that Iraq possessed WMD.
A showcase for horrifying, dumb-ass planning:Â The U.S. would have only 5,000 troops left in Iraq as of December 2006 and assumedÂ the military would be almost completely “re-deployed” out of Iraq within 45 months of the invasion.
In the UK,Â  bloody-dumb businessÂ at 10 Downing: â€œMilitary action was now seen as inevitable. Bush wanted to remove Saddam, though military action, justified by the conjunction of terrorism and WMD. But the intelligence and facts were being fixed around the policy. The NSC had no patience with the UN route… There was little discussion in Washington of the aftermath after military action.â€

Afghanistan tanked as much-needed, required resources were diverted to the war in Iraq.
FromÂ USAToday in March 2004:

In 2002, troops from the 5th Special Forces Group who specialize in the Middle East were pulled out of the hunt for Osama bin Laden in Afghanistan to prepare for their next assignment: Iraq.
Their replacements were troops with expertise in Spanish cultures.
The CIA, meanwhile, was stretched badly in its capacity to collect, translate and analyze information coming from Afghanistan.
When the White House raised a new priority, it took specialists away from the Afghanistan effort to ensure Iraq was covered.

A good look at the overall cause/effect of the Iraqi war on Afghanistan can be found here.

And in the Iraqi blowback: In their quiet moments, aid workers call it â€œthe tragedy:â€ the billions of dollars that never arrived here. The troops that landed somewhere else. The bright minds that turned to that other, greater subject. And, in all those events, the sad sinking of the promise that greeted the American-led victory over the Taliban in November 2001, more than seven years ago.
The â€œtragedyâ€ these aid workers are referring to, of course, is the war in Iraq. Not that the Iraq war itself was tragic but that it was calamitous in its results for the other war that suddenly fell to the lower tier. More than any other factor, it is the American invasion of Iraq that looms over Afghanistan and all of its dashed hopes.

Hence to the dangerous, complicated and escalating new/same operation in Afghanistan.

Last October, Gen. David D. McKiernan, head of US/NATO forces in Afghanistan and only four months on the job, said an “Iraqi-style surge” will not work in a country of mountains and few paved roads.
McKiernan described Afghanistan as â€œa far more complex environment than I ever found in Iraq.â€
And this past March, McKiernan opened his big-general’s mouth and told the BBC the war cannot be won via military might: â€œBut there are other areas â€” large areas in the southern part of Afghanistan especially, but in parts of the east â€” where we are not winning.”
So then last May, the good general was fired.
Defense honcho Bob Gates, in showing McKiernan the door, was quoted as saying the US needs “fresh eyes” and “fresh thinking” on the becoming-debacle of Afghanistan — so instead named as a replacement an old eye and mind in the form of one, Lt. Gen. Stanley A. McChrystal, a true-blue, fierce military nut and fervid warrior of the dark side.
So praise from Dick Cheney: “The decision to send Stan McChrystal…is a good one… “I think the choice is excellent. I think you’d be hard put to find anyone better than Stan McChrystal.”
McKiernan, for his part, claimed he was “dismayed, disappointed, and more than a little embarrassed” about getting the axe — a telling insight into the chaos of the US involvement in Afghanistan.
Also revealing is how the now-retired McKiernan’s emotional outburst — catch words, ‘dismayed, disappointed, embarrassed’ — does kind of float like President Obama’s alliteratedÂ vow to â€œdisrupt, dismantle and defeatâ€ al-Qaida.

First and foremost, however, those freakin’ Taliban.
Not only with increase in use of IEDs and suicide bombers, the Taliban are also viewing politics on a world scale.
FromÂ foreignpolicy.com last week:

Although 4,000 U.S. Marines entered the Taliban’s heartland in southern Helmand province at the beginning of this month, the Taliban seem to be largely bypassing the Americans to focus on the British contingent in the center and north of the province.
This should not be a surprise.
Public dissatisfaction with the war is growing in Britain and Prime Minister Gordon Brown’s unpopular Labour government is facing a general election by June 2010.
Taliban strategists likely believe they have a chance to drive the British from the field.

The UK has indeed been mauled — Twenty-two soldiers, including eight within one 24-hour period have been killed.
According to Pakistan’s The News, a senior British general said the insurgent level in Helmand province was under-rated from three years ago: â€œWe thought that the insurgency still existed in Helmand, but the violence and scale has been shocking,â€ General Sir Timothy Granville-Chapman said.
Indeed.Â
In a British poll result released Tuesday by the UK’s The Independent: More than half of voters (52 per cent) want troops to be withdrawn from Afghanistan straight away…Fifty-eight per cent view the war as “unwinnable”, with 31 per cent disagreeing.

And with the US?

Obama’s plan right now is to nearly double the US Afghan presence to about 68,000 troops by this year’s end, but from all indications, McChrystal will ask for more boots on the ground, as did one of his advisors today in Washington, though, I’m sure he missed the extreme-ugly irony.
According to VOA:

Senior Washington analyst Anthony Cordesman of the Center for Strategic and International Studies says the United States and its allies need to take the Afghanistan war more seriously.
…
“This war has been fought without resources, but above all without realism,” he said.
…
Cordesman says the current U.S. and British military operation in Helmand Province was launched without adequate preparation for civilian aid after the military delivers stability.
But he said it might still be successful, and could become a model for what is called the clear-hold-and-build approach to defeating insurgents.
In any case, he says, it will provide valuable lessons as Afghan, U.S. and NATO forces prepare to move into other parts of Afghanistan.

In any case, how many US body bags before Afghanistan in its serious realism is understood?
A tragedy.