The horror of these things — cluster bombs. 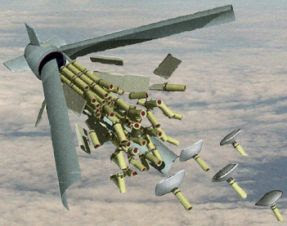 Sunday, Aug. 1, marks beginning ofÂ an international ban on those terrible weapons — Cluster munitions explode in mid-air to release dozens â€” sometimes hundreds â€” of smaller “bomblets” across large areas. Because the final location of these scattered smaller bombs is difficult to control, they can cause large numbers of civilian casualties — and a treaty in which the US still has not recognized.

In the the not-so-distant past, cluster bombs have been used in Cambodia, Kosovo, Afghanistan and Lebanon.
The Convention on Cluster Munitions started in February 1997, in which 46 nations issued the “Oslo Declaration,” and a final draft of the treaty was adopted in May 2008 at a meeting in Dublin, Ireland.
One hundred seven nations, including seven of 14 countries that have used cluster bombs and 17 of the 34 countries that have produced them signed the original document — which prohibits the use, production and transfer of cluster munitions and obliges those that have ratified to destroy stockpiles.
Some nasty, dumb-ass countries have steered clear of the treaty: China, Russia, India, Israel, Pakistan, Brazil and, of course, the good-ole US of A.
Two years ago, at the offset of the ban process, the US Pentagon declared: “While the United States shares the humanitarian concerns of those in Dublin, cluster munitions have demonstrated military utility, and their elimination from US stockpiles would put the lives of our soldiers and those of our coalition partners at risk.”
Bullshit — U.S. field artillery used them on the ground in Iraq, and a shitload is still hanging about.
From a USATODAY investigative piece in December 2003:

The Pentagon presented a misleading picture during the war of the extent to which cluster weapons were being used and of the civilian casualties they were causing.
Gen. Richard Myers, chairman of the Joint Chiefs of Staff, told reporters on April 25, six days before President Bush declared major combat operations over, that the United States had used 1,500 cluster weapons and caused one civilian casualty.
It turns out he was referring only to cluster weapons dropped from the air, not those fired by U.S. ground forces.
In fact, the United States used 10,782 cluster weapons, according to the declassified executive summary of a report compiled by U.S. Central Command, which oversaw military operations in Iraq.
Centcom sent the figures to the Joint Chiefs in response to queries from USA TODAY and others, but details of the report remain secret.

No wonder the Pentagon hates-to-loathing entities like WikiLeaks.
The US has a shameful history with those weapons: In Vietnam, between 1964 and 1973, more than 2 million tons of explosive ordnance, including an estimated 260 million cluster munitions were deployed, and with reportedly about a 30 percent failure rate, leaves about two-thirds of the country still mega-dangerous.

Although President Obama signed an export moratorium on the weapons last year, and the US military claims it won’t use cluster munitions with a failure rate of more than one percent (yip-pee) by the end of 2018 — eight frickin’ years from now.
How long does it take to figure this shit out?
Even the nit-wit, corrupt president of Afghanistan, Hamid Karzai, signed the ban in December 2008, and supposedly the US hasn’t used cluster bombs since 2003, but this is, of course, the weapon that just won’t stop killing.

In southern Lebanon, where a quick-brutal conflict took place in 2006, the area is still triggered by all the unspent munitions that’s literally been spread across the countryside.

Cluster bombs still contaminate roughly 80 percent of the farm land and the forests. The bombs lurk underground, in between rocks, in waste pipes, on trees or in dry stone walls. They are everywhere, spread all over the place.
The Israeli army used munitions that were 35 years old, says Mohamed Scheikh from the center for minesweeping with the Lebanese army.
“Therefore the number of duds is very high. In some areas it’s 100 percent — none of the discharged bombs exploded right away,” he explains. “43.6 square kilometers (16.8 square miles) in Southern Lebanon were affected. So far, we’ve managed to clean up half of it already.”
Cluster bombs are malicious weapons.
They do not have a due date: “They are always ready to explode. And the longer they remain underground, the more sensitive and dangerous they get. Due to heavy rain and torrents they change their position,” he says.

Obama should do more — his whole gig is change — and sign the ban on these terrible, senseless and civilian-killing weapons.
And sure as shit not wait until 20-freakin’-18 to do something.